The excellent writer Elly Blue has written a thoughtful post about the change in bicycle activism:

In it, she laments the demise of grass-roots activism in Portland's bike scene. I invite you to read it and ponder your own experiences with "bicycle activism" where you live.

I have lived in Portland since 1975, having moved here with my family when I was twelve years old. I beacme a dedicated bicycle commuter that same year, when riding the school bus became not only onerous but dangerous; bullies would pound the crap out of me in the back of the bus and after three broken pairs of glasses my family and I had had enough. I started riding to school in all but the worst winter weather, and for the most part I have never looked back. Not even forty years later.
So on some level I was a bicycle "acitivist" from an early age. Because, seriously, how many other teens would eschew car ownership and the hallowed drivers' license until the age of twenty-four?

But the older I get, and the farther removed I am from working in the bicycle industry, the less my life has become About The Bicycle, and the more the bicycle has simply become another part of my life.
Perhaps some of it is aging, and some of it is that racing got too expensive and physically demanding, and commuting daily to the same place is no longer a part of my everyday life. Whatever the reasons, I ride my bicycle most days but now it's just something I do on my way to somewhere.

Today is my eleventh wedding anniversary. Sweetie, who is not much of a bicycle rider but who does like to ride with me sometimes, suggested we ride to a cafe for brunch, and then to a park afterwards. It was delightful. The bicycle was not the event; it simply got us to the event and then home again. And that was all I needed or wanted it to be.

I agree with Elly that the recession hit bicycle activism hard, but I would go a lot further and say that the recession hit many facets of modern culture and society hard and we may never recover from that. Instead, we may change as the world is changing, to the point where bicycle activism will look like something so different to our great-grandchildren that we would not recognize it. And maybe that is okay. At any rate, I suspect such change is inevitable. And so I keep riding. 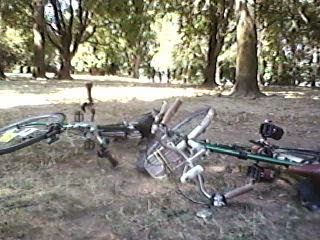 Posted by bikelovejones at 3:44 PM