I just returned last night from a four-day weekend working in Phoenix, Arizona. I was there to provide musical leadership and education for a large synagogue in the Phoenix/Scottsdale area. Per my contract, the synagogue paid for my transportation costs, and arranged for me to have homestay hospitality near the synagogue that included a loaner bicycle.

In the best of all possible worlds, I would make this arrangement in every city I visit. It worked beautifully in Kansas this past summer and  again in this fall. And it works pretty well in Phoenix, at least from November through April when the heat is not so extreme. (I was in Phoenix in August and riding a bicycle in 110-degree heat was simply inadvisable.)

My loaner bike was a Giant Sedona hybrid with a sit-up-and-beg position. The bike was a little small for me, and the saddle could not be moved any further rearward, which definitely caused a bit of a strain on my knees. But the ride was only 6 miles round trip, so I lived with it.

I enjoyed mostly quiet streets on my short trips back and forth. Most of my route included bike lanes. A few short stretches were narrow and had no bike lane; instead the pavement there was marked with big sharrows and this sign helped to make things even clearer: 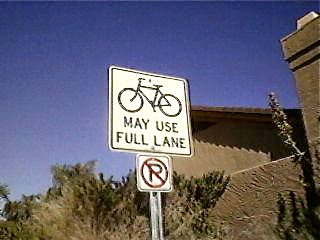 The weather was warm and sunny. Lows of 60F quickly gave way to afternoon highs in the mid-80s -- not unbearable and actually sort of pleasant on a short-term basis. I enjoyed the hugely different flora and fauna of the desert Southwest, a place I will visit again at least several times this academic year.

While I was in Phoenix I met Joe Berman, owner of Sunday Cycles and also a member of the synagogue. He knows a couple of bike folks in Portland, and we had a nice talk at the end of religious school on Sunday before I had to catch my flight home. He offered to loan me a better-fitting bike for my next visit, and suggested that if possible I should try and come in a day early to enjoy some longer rides. He was delighted with my tallit (prayer shawl) made of recycled bike musette bags, and I gave him the link to look at my ritual Judaica made from old bike parts.

I know I would not want to live here year-round, if only because the summer months would positively kill me. But as far as places to visit and ride go, Phoenix shows a lot of promise for the next several months. I'm looking forward to returning in December. 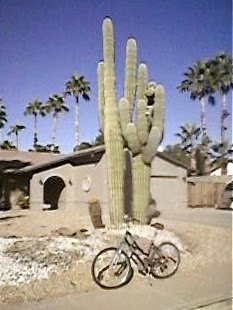 Back home in Portland, we're looking at a cold snap this week. Tomorrow the temps will drop by more than ten degrees into the low 40sF, and rain is due. I will don my woolies this afternoon and enjoy a ride in a climate that feels, well, more familiar for this time of year.
Posted by bikelovejones at 11:07 AM