How many bikes does anyone need?

This is NOT a rhetorical question.

There was a time when I owned one bicycle at a time, and it only got replaced when it was outgrown or stolen. For many years, I was content to ride my one bike into the ground, tune it up every spring, and ride it into the ground some more. During this time, the longest I kept a bike was probably around five years -- before it got stolen.

Then I went to work in the bicycle industry. And as I learned more about repairing bicycles, I began to want different kinds of bikes so I could enjoy the technology I was learning to repair. In my first five years at Citybikes, I built up, rode and sold a succession of bicycles, including a 26"-wheeled BMX whose wheel I rebuilt with a Sturmey-Archer 3-speed hub; a Mondia road bike that was covered with rust and corrosion, and which I painstakingly brought back from the dead; and a Gitane road bike that I converted to upright bars and used as my primary transportation while I waited for my Rivendell to be delivered.

For a little while, perhaps three years or so, I owned two Rivendells -- the one I'd had built custom and a second one that came my way when its original owner decided it didn't fit him. Rivendell #2, an All-Rounder, actually fit me far better than the custom bike I'd ordered in 1998, so eventually I sold Rivendell # 1 and rebuilt # 2 as an all-purpose city bike.

A few years ago, I found a smaller mountain bike with short enough reach to work with drop bars, so I bought it for the grand price of $25, stripped it and rebuilt it as a rough-stuff day tourer.

I acquired a '94 Bridgestone mountain bike in trade for a very expensive seatpost I'd gotten on my shop discount and wound up not needing. I rebuilt it as a short-track racer and enjoyed the handful of races I entered it in. But that was at the end of my racing career, and so after a few races I hung it up on a hook, and there it sat for over two years.

Over the last year, I did two things: I rebuilt the Bridgestone as another upright bike with front and rear racks, and rode it while I took apart the All-Rounder for a full overhaul. Both bikes work quite well now. I still mostly ride the All-rounder, but some days I like to switch things up and ride the Bridgestone. It has a different, heavier feel and a slightly different handlebar position.

Last summer, I had to recognize that, for whatever reason, drop bars were no longer working for me. The braking was hard on my hands, even with brake levers specifically designed for a shorter reach; and I did not enjoy leaning over so far the way I once had. There's more belly in the way, the result of some less-then-stellar eating choices, plus metabolic changes and scar tissue related to Crohn's. The Sekai has hung on a hook for several months and I don't know if I will keep it or not.

There was a time I owned as many as six, which is a somewhat lower number for someone in the industry. Many of my co-workers at the time owned nine or more bikes each. In an extreme case, one co-worker owned over seventy bikes in various stages of ride readiness. I saw no need to own more than six, and by the time I'd left the industry in 2012 I was down to four bikes.

If I decide to sell the Sekai -- I don't need a third bike with upright bars so I won't convert it -- I'd be down to just two bikes. Which seems, at this point in my life, like quite enough.

One upside of owning fewer bikes is that I don't need as many portable tool sets (it's customary for many bike enthusiasts to own a patch kit, tire levers, mini-tool and pump for each bike so they don't have to swap around every time they want to ride a different bike. I have been no exception). I also don't need to keep as many spare parts on hand, meaning there's more room in that space for yard tools and other things without me tripping every time I turn around.

Another upside of owning fewer bikes is that I realize I don't need to work on them nearly as often, and am more inclined to let things go a little longer. So far this approach hasn't caused any harm to the bikes, or to me.

Finally, by owning fewer bikes, I find that, for some reason, I end up shopping less often for bicycle-related clothing or accessories. After all, I already have panniers, racks and a basket, enough capacity for each bike that I don't really need anything else.

Sure, bicycles are a great hobby. They have been a hobby and a passion of mine for a long time.
But I'm getting older, and I find that I'm more interested in riding my bicycle than puttering on it. I still enjoy puttering, though nowadays I'm more likely to fix up an old cheap bike I find in a free box, and then give it away or sell it cheaply to someone who's short on funds. It's satisfying to bring a dead bike, even a cheap one, back to life; and if it ends up under someone then I'm happy.

Lately the cold weather has combined with serious fatigue from Crohn's, to keep me off the bike more than in winters past. I've been able to make some efforts and enjoy them, but many times I opt to go multi-modal now, hopping the light rail train and riding only half the distance to get into town.
I hope I'll want to ride more when the rain gets warmer in the spring.

So -- how many bikes do YOU own? How many do you think you need? What kinds, and why?
And which ones would you miss the most if they went away? It's worth pondering.
Happy riding! 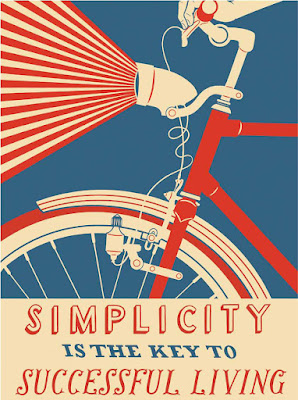 Posted by bikelovejones at 9:17 PM