I recently came into an assortment of used baskets in various states of disrepair.
I'd been thinking about adding a front basket to the Bridgestone and finally did it last week. 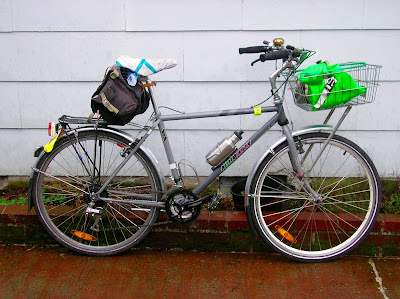 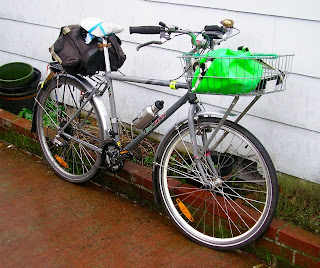 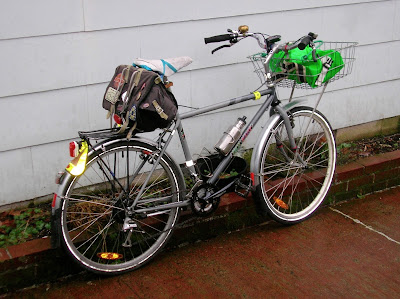 Removing the front rack was a no-brainer. I wasn't likely to use two sets of panniers since I'm pretty sure my self-supported solo touring days are behind me; and a basket would prove immediately useful.
Wrapping the fork legs with a layer of cloth tape gave the clamps something to grip so they wouldn't fall down the leg under load.
Ideally, I'd use shorter struts and run them to rack eyelets but this fork doesn't have any, so there it is.

I am using an old waterproof messenger bag as a default basket bag for wet weather. I've also added an elastic cargo net on top to keep things from bouncing out on bumpy roads.
I've already used it for several grocery runs and took a bunch of old parts to Citybikes to trade in. As long as I don't overload it -- say, no more than about ten pounds of stuff -- it rides and handles fine.
I might want to swap in a taller stem, but that's not urgent.

Empty, the basket doesn't weigh that much (It's a medium-sized Wald 139, now sold as the 1392). Bigger that the 137 by several inches, but smaller and lighter than the industrial-strength 157 (aka "newsboy" model).  I feel like adding a basket makes the bike instantly un-racy and more useful at the same time. Try it on a bike you like to ride.
Posted by bikelovejones at 11:03 PM