The rain was supposed to arrive by lunchtime.

"If you're planning on a bike ride, do it soon," my Sweetie advised. So I got dressed and headed out.

I took the scenic route over to Rivelo to pay a social call to proprietor John Bennett. It was cool, but not cold; and by the time I'd gotten down to the Esplanade I was wearing a thin wool short-sleeved jersey and had stuff the flannel shirt in my basket.
The switchbacks down to the Esplanade (from the Rose Quarter Transit Center): 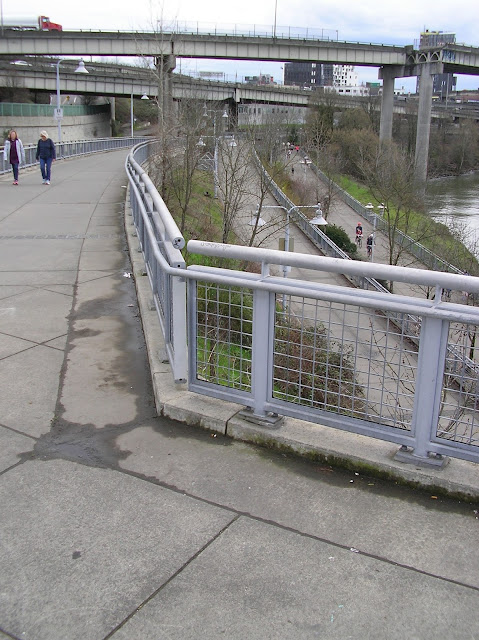 I rode from one end of the Esplanade to the other, and turned onto Water Avenue so I could ride over to Rivelo without having to deal with too much traffic. 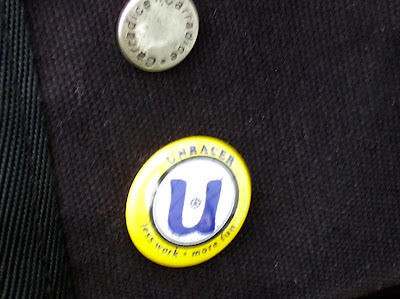 John approved of my recent Carradice bag resurrection and we had a nice talk about bikes and music and stuff. The clouds were moving quickly but there was no sign of rain. Still, I'd promised Sweetie I'd stop at the store for dinner fixin's so I said goodbye and waited for the Light Rail. 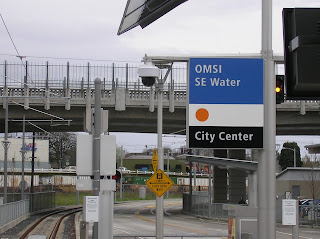 While I waited, I watched a small group of folks clad in ponchos, safety orange vests and hats and other odd costumes push some shopping carts into a vacant lot on the other side of the tracks, where they set up an inflatable dummy and some speakers, and for about twenty minutes they stood around and drank beers and chatted while the Pogues blared from their mobile sound system. After a little while, they packed up and walked away. As they did,  I asked what they were doing. One of them yelled back, smiling, "We had nothing better to do on a Saturday afternoon." 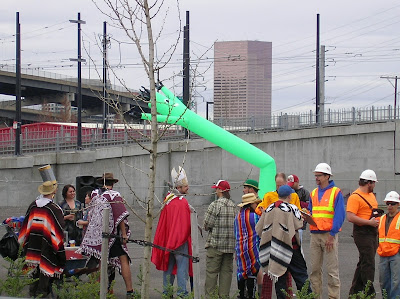 I love this town.

The train arrived shortly after that, and I hopped a ride for me and my bike to Interstate Ave. and Rosa Parks, where I got off, grabbed the groceries at the market there, and rode the rest of the way. There was the barest hint of a sprinkle, a suggestion really, as I loaded up my basket and rode the short distance home.

I was grateful for the ability to go multi-modal part of the way. Since switching to a new medication for Crohn's disease I've struggled with fatigue on and off, and today at the end of the riding part I was feeling really tired. Still, it was very nice to get out and spin my legs doing basically not much at all.