there's a special place for bike thieves - but is it hell? should it be?

A few days ago, someone broke the three locks that secured donated bicycles and a janky cargo trailer I was preparing to tune up for Catholic Charities refugee resettlement program. They left the two cruisers, and took the two mountain bikes and the trailerfrom where they'd been locked up beside my house. Of course, being diligent thieves they also took the broken locks (likely to avoid leaving fingerprints).

Since the bikes were donations and I'm not officially a non-profit organization, I haven't called the police. The best I can do in this situation is get some more locks and collect more donation bikes to replace what got pinched.

The existence of bicycle "chop shops" along the Springwater Corridor and in other homeless encampments is well-documented. Some brave souls have actually stolen their bikes back, at considerable personal risk (because the homeless men who steal and guard those bikes are armed with guns, knives and other weapons which they will use to keep their loot).

I'm not brave enough to do that.

Years ago, when I had a customer's stolen bike in the workstand at the shop, The too-short-for-the-bike fellow who was waiting for me to fix the flat realized that I had realized the bike was stolen. In a split second he leapt over the counter, punched me to the floor, took the bike out of the workstand and took off. Of course, he was never caught. And of course, while I staunched the flow of blood from my bruised nose, the police who responded advised me to never try and save anyone's bike again. "It's just a bike," one of the officers gently advised me. "Your life is worth far more than that, regardless of your intentions."

That was almost twenty years ago. I have not stepped between a thief and a bike since. It's a personal decision for each of us, based on one's experiences and strengths. My strengths are not in direct physical force, and I know it.

Still, the loss of the two bikes, and the trailer (which I'd already repaired to make it usable), were annoying and frustrating. 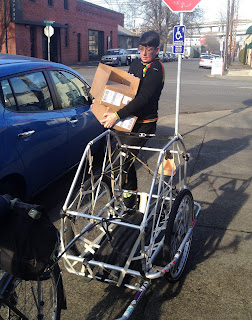 Four years ago, I had my own trailer stolen from my home. It was a repaired and converted kids trailer, strung with nylon webbing from a lumber yard and used to haul cargo. It cost me maybe forty bucks for the trailer, replacement wheels and the work and small parts I'd put into it.
Six weeks after it was stolen, I spotted it at a homeless encampment that clearly looked like a bicycle chop shop. The man who was unloading it glowered at me menacingly as I stared at my trailer. it was clear that he would not give it up without a fight.


Today, I have a folding trailer that can be stored flat, and indoors. I also own fewer bicycles, sticking to just two that I alternate depending on my needs that day. They're both stored indoors under lock and key. When I'm out on errands, the bike is locked with a heavy-duty U-lock AND a cable. I don't like having to carry such a heavy lock, but this is the world we live in and that's that.

There's an old saying: There's a special place in hell for bicycle thieves.

And yet, I wonder how true that is in today's world where so many more people are living one paycheck away from homelessness, from desperation, from starvation, from death. (Yes, people have died from being homeless here in Portland, often due to exposure to the elements and starvation and/or the illnesses that accompany those things.)

And I keep coming back to the idea that perhaps each of us has the personal ethics we can afford to have.

If I have to steal in order to survive, I'm not likely to sit up at night worrying about my soul. I'll be too busy worrying about how to get warm, dry and fed.
And so I can't be TOO angry at whomever stole the bikes and trailer. Because it's highly likely they were desperate, homeless and hungry enough to steal; and perhaps addled enough by illness or addiction to be unable to find work.

Their numbers are rising.
And it is very hard for me NOT to wonder if one day I might join them on the sidewalk, simply because I'm already living hand-to-mouth and one day I'll get too old to work and the world will get too cruel to care about anyone like me.

So while bike theft is frustrating -- and if my personal bike were stolen, I'd be angry and sad -- the fact is that right now, I can find another bike more easily and legitimately than someone who is forced to steal one.

So I can't be too hard on bike thieves who live under tarps in the thickets out on the Springwater.

And to my friends who've offered advice, thanks. I'll sort it out as best I can, and eventually get back to helping newly arrived Portlanders find their way around town a little more affordably by bike.

If you really feel bad about this whole scenario, please make a donation of money or time to organizations in your town that work on creating stable housing for the poor, refugee resettlement, or advocacy for the homeless. Seriously. Do it today. 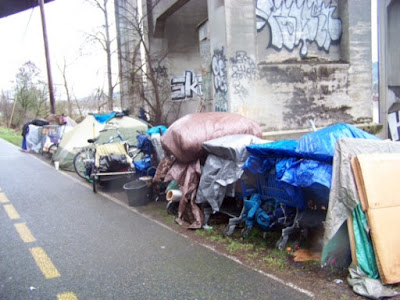 (Photo: homeless encampment along the Springwater Corridor-South, December 2015.)
Posted by bikelovejones at 11:29 AM

Very thoughtful post. Interesting to see your loss from the thieves' point of view.