In my ongoing quest to scavenge free parts and accessories for my refugee bikes, I sometimes come across components that are broken seemingly beyond repair. They get thrown out and I rescue them from dumpsters and scrap metal piles.
This rear rack was lying on the ground next to a dumpster -- presumably someone aimed for the dumpster and missed -- because the rear half of the struts had broken away from the top platform slats.
The welds weren't all that great to begin with, and the aluminum made for a weaker weld anyway.
So if I wanted to make it useful again I'd have to find a way to repair the broken connections. 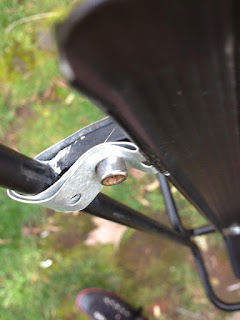 (Left: The chipped paint reveals the break in the aluminum weld, between the end of the cross-slat and the round outside tube)

I tried epoxy, which didn't really work. (The forces involved in mounting a rack and carrying loads should have told me that.)

So then, I drilled holes in the top cross-slat, and then used galvanized metal stripping folded over on itself a couple times, wrapped it around the outside of the platform, and bolted it in place. 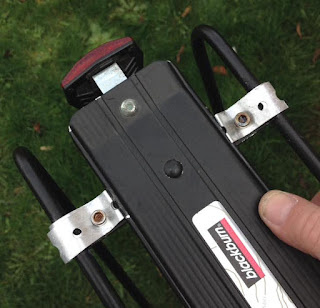 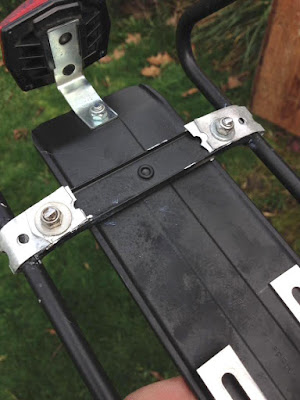 But then, I needed to cover the sharp edges  so anyone loading the rack wouldn't cut their fingers. So I added a few wraps of cloth handlebar tape, covered with a layer of electrical tape. 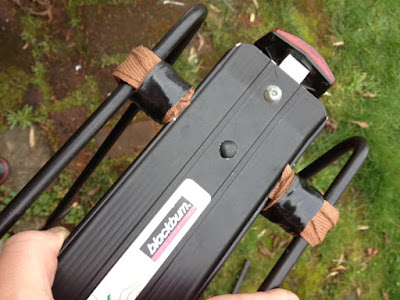 I tested the rack by sitting on it sideways on the ground. It held in place without problems.

I'm pleased with the repair and look forward to mounting it on the next bike I fix up.

Coming next: A porteur rack from spare parts, including a small broiling pan, to replace the old front basket on my BStone.
I hope to get started on this before the week's out, but may not finish it until I get back from my music convention in a couple of weeks.
Stay tuned.
Posted by bikelovejones at 7:31 PM