How much schwag do we need? And when? And why?

When I began working at Citybikes in 1995, I was like a kid in a candy store. Everywhere I looked, there was something cool for me to admire, to covet, and eventually to buy on my worker discount.
Over the ensuing 18 years, I acquired a LOT of stuff.

Of course, I needed some of it. I had parts to install, either as replacements or upgrades on my existing bikes; and then of course I needed to lay in a supply of the cool stuff that was being blown out because it was no longer being made; and then there was the schwag.
The schwag was what identified you as a bicycle enthusiast. The best schwag, the stuff you could only get at trade shows and from dealer reps, identified you as bicycle industry insider -- someone who knew something about the Secret Inner Workings, or knew someone else who did.

In the end, it was all just stuff.
Some of it was good stuff, of course. Stainless steel flasks and thermal coffee mugs, wool socks, shoes and bags (thanks, Chrome and Timbuk2!) that I obtained while working in the business are still in my closet and dresser, being worn and used today. My Timbuk2 messenger bag is now over twenty years old; I ordered it, and another for my wife, direct from T2 back when that was pretty much the way every bag was ordered. They were sewn to order in San Francisco, and came with the shop's order. Mine is festooned with patches and shows a significant amount of wear. 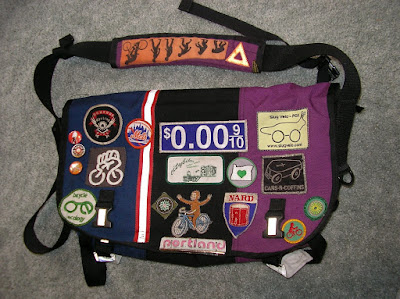 This is the bag in its original patched state, about ten years ago. It was stolen from me, and I was sad. About four years ago I found it on eBay, stripped of all the patches except for the reflective stripe I'd sewn on. I bought it back, applied more patches, and now I'm using it again. It's had quite a journey over the years, and though a singlestrap bag isn't really good for my shoulder I can't let it go. When it's empty, it folds neatly in half and fits inside a larger suitcase, making it handy when I travel.


The rest of it? Stuff.
Lackluster, ordinary stuff, made temporarily "cool" by the application of a logo or brand.
(My favorite example of this is basically everything that Campagnolo ever sold, includng nuts and bolts that were not marked with a logo but which came in a plastic bag that was. I have a tiny plastic bag that is imprinted with the blue Campy logo, containing two small allen bolts that look no different than whatever else is in the drawer of allen bolts in my workshop. Hilarious.)

Alongside these, I've collected and given away dozens of water bottles, keychains, hats and t-shirts over the years. There is nothing inherently special about a keychain. It's whatever memories we associate with the keychain that make it special to us.
What advertisers are counting on is that you'll want the keychain because of whatever cache comes with it when its new; whatever memories you add are up to you, as long as you buy the damned thing -- and whatever larger, more expensive product is associated with it. 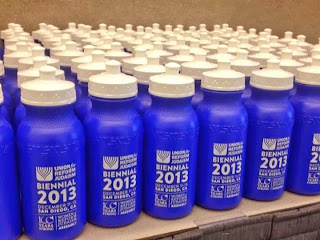 And that is why I'm in the process of unloading all the schwag I still have after two decades in the bike industry. Because it's just stuff, and I don't need it.
Most of it I am giving away. A few select items I'll sell online, because I know they'll sell and frankly, money is tight these days.

And when I go to the odd bike show, I turn down offers of Yet Another Free Plastic Water Bottle.
Because as long as we grab all the free stuff, factories in China will keep cranking it out, to become eventual landfill fodder and floating ocean waste.

If enough of us eschew the schwag, perhaps coporations will look for more sustainable ways to capture our attention. At least until enough of us realize that endless shopping isn't the point. 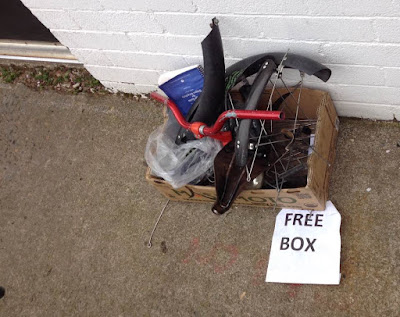 Posted by bikelovejones at 8:58 AM