Last year, my Sunday Parkways experience was, let's say, Less Than Optimal.
On two different routes, I had angry car drivers who threatened to mow me down because the most direct route to their workplace was blocked off as part of the Parkways route. One actually used his car as a threatened weapon when he actually tried to drive it forward directly into me and a couple other volunteers.

So this year, I decided to be proactive.

First, I informed PBOT that I would be happy to return as a Mobile Mechanic for my 12th season of Parkways. Then, I told them that I would NOT function as a traffic cop because that was not part of my job description; AND I would wear something that clearly identified me as a mobile bike mechanic.
To their credit, they understood, and welcomed me back.

And the vest worked. Bright yellow and clearly marked front and back with the words "Mobile Bicycle Mechanic," it was suddenly obvious to folks riding along thay fi they had a mechanical, I was there to help out. As a result, Several people actually asked me for help, taking their cue from my vest. And this time, I rode with a clear purpose and enjoyed myself a whole lot more.

Portland Peeps! Sunday Parkways has room for more volunteers in many capacities throughout Parkways season. CLICK HERE to learn more.

Along the way, I had a fun time running into friends and enjoying the mellow vibe riding one of the three oldest Parkways routes.

Next up: Sunday Parkways North is Sunday, June 30. I'll see you there! 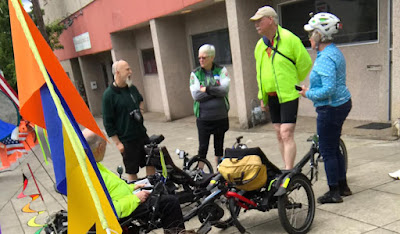 Posted by bikelovejones at 10:53 AM