Errandonnee 14 and 15: Done for the books

Today's ride sews up my official Errandonnee Challenge for 2020.
That doesn't mean I'm done riding -- I'll get in as manby miles as I can enjoy before my eye surgery at the end of March kicks me off the bike for at least a month (so, no #thirtydaysofbiking for me this year -- waaaah).

Today's ride was officially an errand to transport a guitar amplifier on my bike, hoping to trade it in for whatever I could get. (I had found another small acoustic mp for only 20 bucks at Goodwill, and snapped it up before the guy standing next to me could get his hand on the it because we both knew what we were looking at. I took it home, repaired the carry handle, plugged it in and knew it was better than what I had. So out went the old amp.) 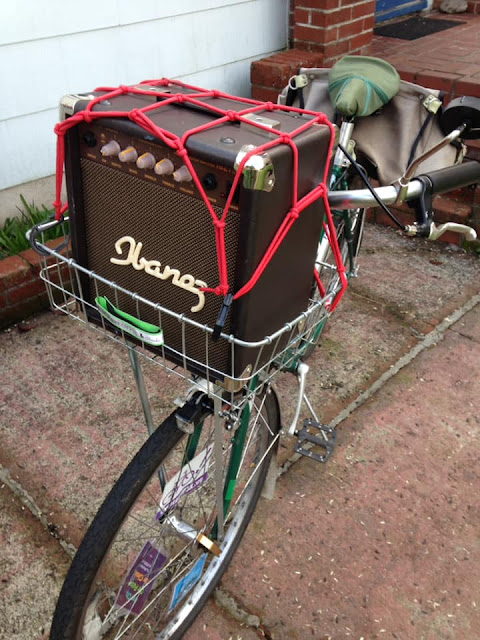 They guys at TradeUp are pretty chill, but just like any shop they're trying to make a profit. So I knew they wouldn't offer me much for the little amp.

In fact, they offered me $25 in trade and said they'd prefer not to offer me any cash at all. So there I was, deciding how to make the most of a paltry offer for an amp I'd paid $70 for new.

I bargained for two 3-packs of strings. THey didn't want to go that far, until I reminded them that their $17 per pack price was retail. My tone gently implied that I had a good idea of their cost and how high their markup was. The manager sighed and shrugged and said, "Fine, yeah, sure."
I'm not sure he would've been as receptive if the transaction hadn't taken place in front of other customers. But there it was.
I took the strings and left. 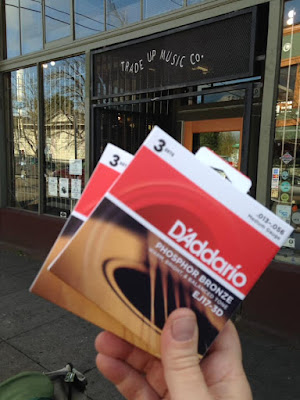 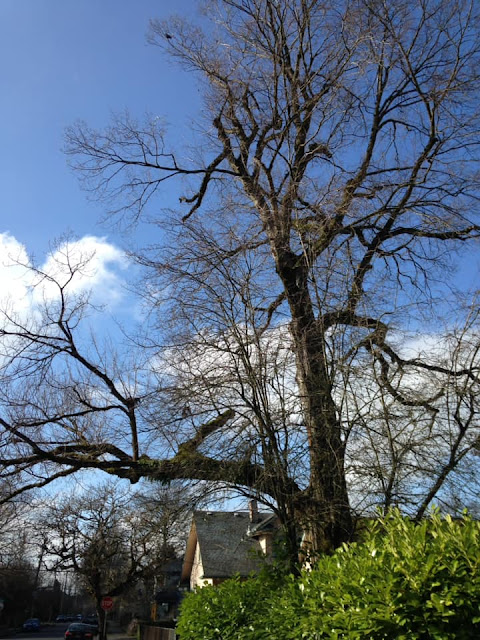 Next, I decided to head over to Golden Pliers for a small bite for lunch. It was a beautiful day, and I knew I'd be hungry if I rode long enough. It was still quite cold, probably not gonna get above 45F, but the sun was bright and elevated my mood. So I pedaled over to Going and down the hill all the way to Interstate Avenue.

The afternoon was simply glorious. I enjoyed the first stirrings of Spring all around me, including tiny buds on the tree branches and crocuses popping up everywhere.
Once I got to Golden Pliers, "Personal Care" became a "Social Call" when I discovered my friend Hazel tending the counter and pouring coffee for customers. It's her new once-a-week gig and so far she enjoys it. 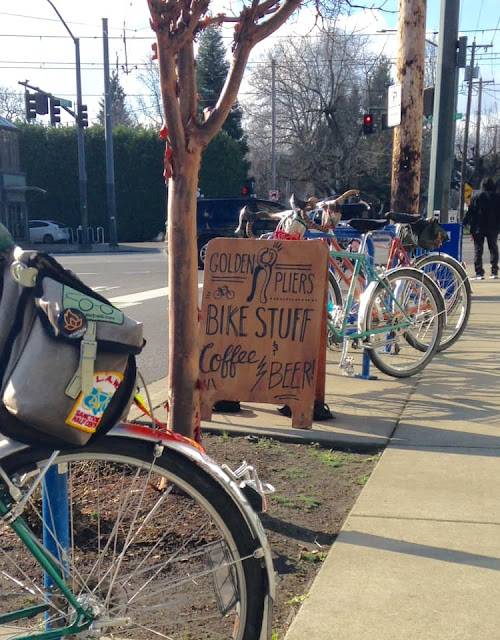 I ordered some reasonably-priced avocado toast and enjoyed the play of the sunlight through the window and on the floor. While I ate, other customers came and went in the gravel-positive bicycle repair space. (I scanned the tire display to discover that there was not a single 26-559 tire; everything on the wall was either for 650b or for 700c wheels.)

I don't believe either of the owners are longtime Portlanders, (though I could be wrong), so I was a little surprised to see this sticker on the tool cart. But hey, Dead Moon was a great love for so many people. Why not? 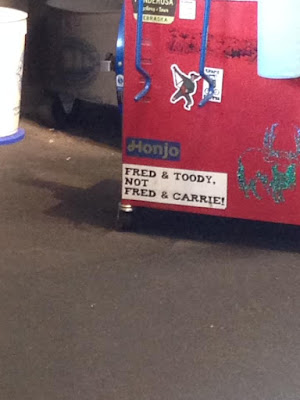 Home now, and getting ready to go meet up with someone who might buy some parts from me. Whatever isn't working on my refugee bikes, I'm trying to sell to raise funds for more lights and patchkits to equip those bikes with. Hopefully we'll both leave happy.

I'll keep riding, though; and I'll offer periodic ride reports on the interestingness here.
Rubber side down, kids!
Posted by bikelovejones at 3:43 PM