biking in the time of coronavirus

I've lost track of how many days we've been under a stay at home order here in Oregon. We've been staying home for at least a couple of weeks now, maybe almost three. But when I can I still get outside for a bike ride.

#30daysofbiking has helped provide some impetus for this; I admit I wouldn't be riding so faithfully without the goal in mind. (In anticipation of an eye surgery that is now postponed until at least May or June, I'd banked a few rides in advance. I am only using those if my depression becomes so severe that I'm better off at home under the covers.)
Yesterday I took advantage of a sunny afternoon to ride over to a local park and do some drumming on a practice pad. The closest Starbucks has just closed to all but drive-thru traffic, and I was cheerfully directed to use the drive-thru on my bicycle, a first at a Starbucks.

Mindful of both my immuno-suppressed status and the CDC's new advisory, I fashioned a functional mask from one of my cycling bandanas. Will it actually make a difference? I dion't know, but folks who saw seemed to appreciate my efforts. 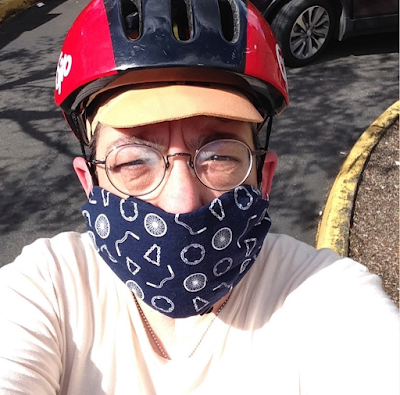 Coffee obtained, I headed over to Penninsula Park, and found an open bench. As I settled in and enjoyed a half-hour of drumming (punctuated by pulls off my cup of coffee), I noticed with some surprise that people were simply not being careful about keeping a safe distance apart. Some passed within four or five feet of my bench behind me; parents were not able to keep their young children from running around and getting too close to others in the park.

I played louder, which seemed to encourage folks to stay farther away from me. (I can get pretty loud on a rubber practice pad. Next time I'll try a real drum and see how socially distant that keeps me from others...)

When I couldn't stand watching peoples' inattention anymore, I packed up, threw my cup in the trash and rode away from the park.
The nice part of my bike rides has been seeing all the new spring growth, which is really taking off here in Portland. Lots of daffodils are just giving way to tulips and even marigolds. The first Irises can't be too far off now, I think.

Today, new reports in my feed have appeared about experts saying that six feet isn't nearly enough distance to stay safe. Some suggest a minimum of twenty feet; others insist that new evidence about the virus' airborne qualities suggests not going outside at all. (Thank god I don't have kids at home, or we'd all go bonkers.)

Since nobody really knows everything (or even most things) about COVID-19, it seems a safe bet that people are going to do whatever makes sense to them -- even if what makes sense is to ignore the whole thing and brush it off as some kind of commie propaganda.

Nonetheless, we are living -- and biking -- in a highly unusual time, and it seems the most sensible thing is to protect ourselves and each other as best we can. If our government can't or won't take the necessary steps, then we have to kludge it ourselves and hope we all make it to the end of this crisis together.

I'm trying. I ride alone, I stay home when I'm not riding, and I take care in all things.
Hope you are as well.
Happy solo riding! 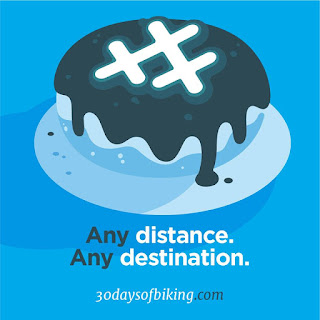 Posted by bikelovejones at 3:34 PM