Protect that fender-mounted tail light: use a bash guard.

I made another thing today. I like the Spanninga XB** fender-mounted tail light a lot. It's small, more than bright enough to keep you "legal" after dark, easy to install on a fender and quite affordable; but it needs a bash guard to be truly complete.

Unprotected, the light is very vulnerable because of its mostly-plastic construction.
Chrome bash guards to fit this and other tail lights available commercially (for between $5-15), but I wanted to make one from stuff I had. 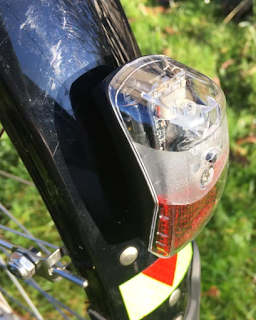 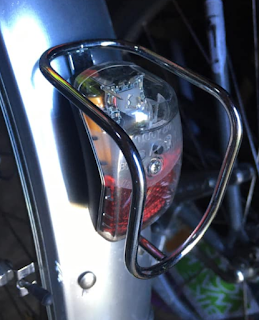 So I looked around the shed, and found an old Erector set. I'd originally snagged it with the hopes of gifting it to my nephew for his kids, but the set was missing far too many parts to build anything in the accompanying booklet. So I began poking through the box to come up with parts to fashion into a bashguard. 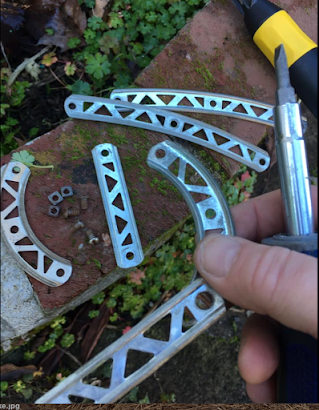 I decided that three shorter pieces, one straight and two curved, would form the foundation of the guard, wrapping around the sides of the light, with a section of stainless steel spoke protecting the top.
I needed to wrap the sides so the guard would fit within the width of the fender, and the piece guarding the top needed not to stand up too far (to catch on anything, like a pantsleg while I swung my leg up and around the back of the bike).
I also needed to utilize the holes in the existing Erector pieces for the light'
s attachment bolt to come through on its way into the fender, to provide more stabilty for the whole unit when assembled.
So I carefully joined the three pieces with the tiny Erector nuts and bolts and some Loctite on the threads, and used needlenose pliers to carefully bend the extended piece into a guard. 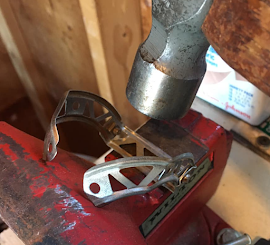 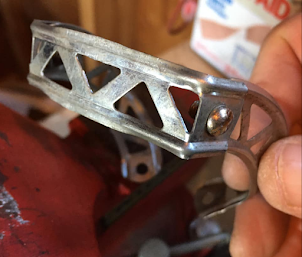 Then, I flattened the middle section to reduce the stack height of the pieces that the light's bolt would go through into the fender, so there would be enough threads on the underside for the nut.

When I added the piece of bicycle spoke for the top of the guard, I made loops for the mounting bolt and for the joining bolt in front, and then flattened them both to reduce the stack height on those as well. Because my bench vise has a small "anvil" platform, flattening these pieces with a few well-placed hits from a hammer was pretty easy. 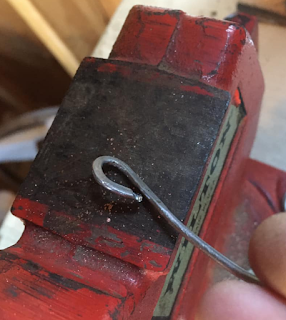 Then, I began putting everything together.

First, I applied the lower loop of the spoke to the connection of the two curved Erector pieces in front, a little like a wrestler's award belt.
Then, I brought the other loop over and behind the light, and looped it onto the fixed bolt, then pushing the fixed bolt through the back of the guard frame and the fender. 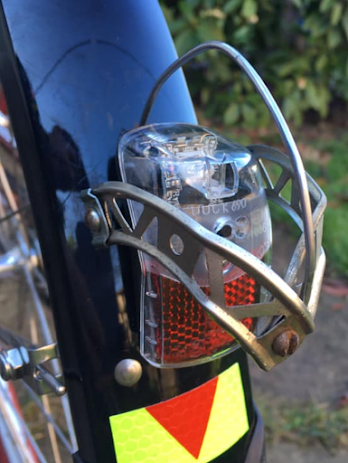 Finally, I put some Loctite on the threads, put ion a washer and the nut, and tightened everything down securely.

The end result? A funky, functional bash guard for virtually nothing that took me about twenty minutes to make and install.

I left enough room in front of the light for my fat thumb to push the switch, or to unscrew the front plate to change batteries. Plenty sturdy, looks a little odd but it works.

And the spoke is thin enough that it doesn't really block the light at all.
#makestuffoutofstuff
#diybikeparts
#singlespeed 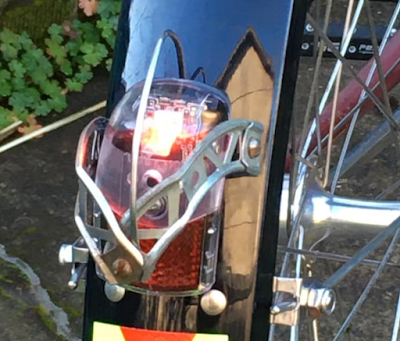 (**NOTE: The Spanninga XB is hard to find at bike shops. Peter White sells it, but they and Rivendell Bicycle Works both offer other fender-mounted tail lights that are great, and worth checking out. Whatever you choose, make sure there's enough room left on your fender for a bash guard of some kind, too.)
Posted by bikelovejones at 10:42 PM