I tried to have faith, but it made me nervous: update on Nitto saddlebag Q/R

Some months ago I invested in a Nitto saddlebag quick-release unit for my All-Rounder. My hope was that it would make it easier for me to deal with wanting to tow my Burley Travoy and have a Carradice Saddlebag on my bike. But having to mount the bracket on the saddle springs made me too nervous to keep it there for too long; and the fact remained that I still had to remove my saddlebag in order to tow the trailer.

So today, I removed the Nitto bag support-mini rack from underneath, and removed the Q/R unit from the saddle springs. Then I installed an older, very nice Blackburn touring rack that sat very close to the top of the rear fender, meaning that I now had all kinds of room for the trailer's tow bar.

I then used the adapter to install the trailer hitch directly onto the rear rack, which positioned it lower and further rearward. The end result is that now I have both, at the same time; I can tow my Travoy without having to remove my saddlebag.

It still isn't perfect; I have to lift the back of the bike a little bit to wiggle the trailer into the hitch. The trailer's tow arm attachment is nylon, and the hitch is metal, so at some point the nylon part may wear out or break from heavy use; but I actually don't use the trailer that often. Also, the trailer sits almost a foot farther away (rearward) from the bike than it used to. That doesn't seem to be as big an issue, since the narrow Travoy tracks so well behind the bike.

All I have to do now is secure the adapter so it doesn't get stolen. Probably the way to do that for now is to put a little blue locktite on the threads of the bolts, and then stuff the allen key holes with tinfoil.
I think this will work for quite awhile. 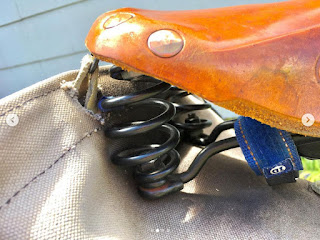 I suppose the springs are stout enough to have handled the stress, but I didn't really feel comfortable testing how much stress over a period of time, especially considering the cost of the saddle and wheter or not I'd be able to get replacement parts when I needed them.

With the Q/R bracket gone, I could once again run the bag's straps through the saddle loops. 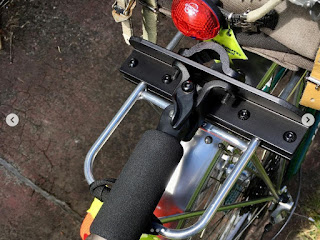 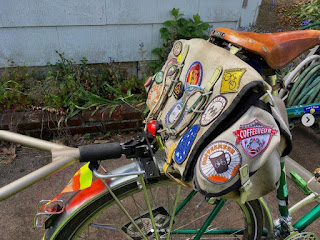 Above: The adapter allowing the hitch to sit on top of the rear rack. This requires a full-size rear rack for the hitch to clear the saddlebag it's there to support.
Because I insist on using a Camper LongFlap  (the largest saddlebag in the Carradice line) with a 53cm frame, I need the support from a rack underneath.

The repositioned trailer hitch sits behind the saddlebag with enough room to open the bag while the trailer is attached.

The end result is not bad at all. 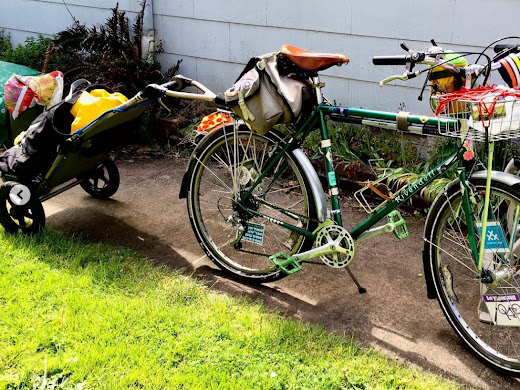 Posted by bikelovejones at 9:35 PM