Technically, cyclocross season began earlier this month for many across the country. I'd been practicing casual dismounts off my bike for some weeks during my commutes. But when the forecast called for rain yesterday afternoon I knew it was time.

Before I left for work yesterday, I grabbed the long piece of scrap plywood I'd rescued a couple of years earlier, and which had been left out all last winter to "season". I brushed off the leaves, mud and slugs and spent the next 40 minutes or so turning it into a practice barrier.

After work, I rode over to Overlook Park for the first 'cross clinic of the season, sponsored by Edge Fitness and presented by the nice folks on the Existential Velo team. Because attendance was small at this new series of clinics, and because there were no pro racers offering instruction, it was less like a clinic and more like a practice -- and I loved it.

I had worried that so much time away from the intensity I'd known during short-track would leave me feeling out of shape and dreadfully slow and clumsy. (My last short-track race was in mid-August, and I've done no serious, organized "training" to prepare for cross other than a weekly quasi-interval session during my morning commute. If I could work in the "interval" time, I would substitute time on a loaded cargo bike instead.) I needn't have worried. After some excellent off-bike warmups I felt pretty ready to go, and we spent the next 90 minutes practicing mounts and dismounts. My mounts still suck, but slightly less so; I got some pointers to definitely help me improve; and although I don't need to dismount like someone with clipless pedals, the technique actually works pretty well with my flat BMX pedals, and I will now practice to incorporate it into my cross technique.

Stamina will still be an issue, of course; Without a gym program, a coach or really a clue, I am still gasping for breath on the run-ups andmaybe there is just nothing I can really do about that. (I was good; I had my rescue inhaler with me, though I never really needed it.)

Everyone rejoiced at the rain -- Oregon is the only place I know where this happens -- which took hold about the time our clinic started and fell lightly but pretty steadily the whole time. The air was mild and not too cold -- I did the entire clinic in jersey, arm warmers and knickers without feeling a real chill. But by 7:15 it was beginning to get too dark for me to see well enough to continue and I headed home, tired and happy.

I am learning about hard efforts punctuated by periods of rest. Today it's an easy-paced commute with mid-day errands thrown in. Yom Kippur, which begins tomorrow night, will count as a rest period of sorts (though with a very different focus).

I'm doing an informal practice of my own on Sunday, and hope to continue this habit through the season. Even though I'm only racing five, maybe six races this fall and winter, I am already looking forward to what promises to be a fun -- and wet! -- cyclocross season. 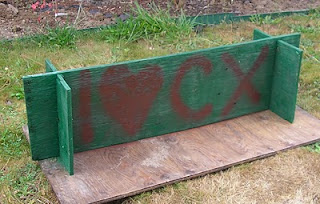 Posted by bikelovejones at 6:35 AM