Some solutions to the previously mentioned conundrum have presented themselves:

1. I've found a home for the Mountain Goat; a friend has offered to buy it from me and build it up himself.

2. I've had a bear of a time figuring out how to make the All-Rounder work with drops. Today I took a 6-mile errand loop on it and realized I just couldn't love it with drops anymore; and I'm tired of messing around with it. So tomorrow, I'm doing an upright conversion to see if that helps me enjoy the bike more. I'll slap on some upright bars, maybe a slightly longer stem to compensate, and some upright levers and thumb shifters; and when I'm done I'll go for a ride and see how I like it.

3a. If the All-Rounder still doesn't work out the way I want it to, then I will probably strip the frame completely and put those parts on the Schwinn frameset, which is heavier (it's a 1980's ATB frame, after all) but which I know will fit me as an upright bike.

4. I love The Rivvy -- the original Rivendell that was paid for by the accident settlement 11 years ago, and which I've ridden to death with both drops and uprights over the years. When I ordered The Rivvy in 1998, the fattest tire anyone could imagine ever running with fenders was a 700 x 32mm -- which is considered almost "medium" width for a touring tire anymore. At the time, the Rivvyw as to be my only bike, and I wanted ease of adjustment on the road; so I asked that it be made for long-reach sidepull brakes instead of cantilevers (which were standard for the model at the time).

Eleven years later, I want fatter tires and the comfort that comes with them. The most economical way to do this is to -- sigh -- pay a framebuilder to put the cantilever braze-ons on the frame and also to raise the rear brake bridge a little. So I talked with the fantastic framebuilder (and friend) Ira Ryan and asked what he would charge to do this work. His quote was very reasonable, totally affordable; and so I will solve the commuter issue for the fall and winter, and then strip down The Rivvy and take the frameset to him, hopefully in October. Since he also builds custom frames to suit for a living, I will give him tons of time and hope to pick it up sometime in January or February.

Most of all, this means I get to devote some of my free time to some serious puttering.
I don't know what does it for any of you, but time spent puttering is definitely a stress-reliever, sometimes almost as effective as riding my bike. So I am looking forward to it.

UPDATE: DONE. Part One of The Great Puttering took less than half an hour, because I decided to simply swap over the stem and bars from The Rivvy and see how it felt on the All-Rounder. After a couple of short preliminary rides around the neighborhood it's promising. I think I'll need to lower the bars a bit more to get the fit pretty close to my position on The Rivvy, but I think this may work. Part Two: removing all the remaining parts from The Rivvy, and then sanding down the paint in the areas where Ira will work his brazing magic. 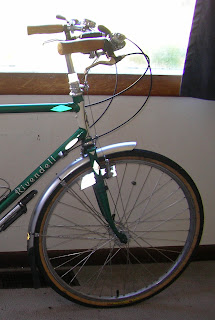 Posted by bikelovejones at 12:00 AM