A bill in the Oregon state legislature was recently dropped by its sponsor after the statewide bicycle advocacy organization raised an alarm and invited people to contact their elected representatives about the matter:

The bill has since been revised to mandate that all bicycles be requipped with rear lights. (Current law requies either a rear light or rear reflector.)

For my money, this is just another example of how legislators would rather place the responsibility for the damage caused by car-centric planning squarely on the shoulders of those who eschew cars and ride bicycles for transportation. Previous examples of this mindset include mandatory helmet laws (which are proven to reduce bicycle use by as much as 50 % in some cities where they are actively enforced) and the notion of "vehicular cycling," made popular decades ago by John Forester and supported by the more hale and hearty members of the League of American Bicyclists.

Such punitive measures -- and the bicyclist-bashing dialogue that accompanies them -- are easier and cheaper to promote and legislate than having real, meaningful conversations about the subsidies that exist for aumobile owners and manufacturers, and for the petroleum industry. It's cheaper to penalize me for being -- heaven forbid! -- An Adult On A Bicycle than it is to consider that our transportation infrastructure desperately needs redesigning to be human-scale, rather than car-centric. The superhighway-based planning of the 1950's is a dinosaur dying a very slow death at the expense of every bicyclist and pedestrian who is injured or killed because they got hit by a car simply for being there -- in the bike lane, on the sidewalk, at a badly-planned intersection, or anywhere else. It's easier to continue to ridicule adults who eschew car ownership as somehow not fully adult, than to consider that maybe the time has come for another way to look at land use and transportation.

Obviously, I'm dreaming that significant changes in bicycle and pedestrian infrastructure -- and greatly increased support for public transit -- will happen in my lifetime. I'm downright delusional if I think that they can and will happen alongside an end to the political machinery that rewards the automobile and petroleum industries with so many breaks and perks (because the machniery depends a great deal upon the support of those same industries for its prosperity, survival and outright relevance).
But a gal can still dream, and I do. Daily. 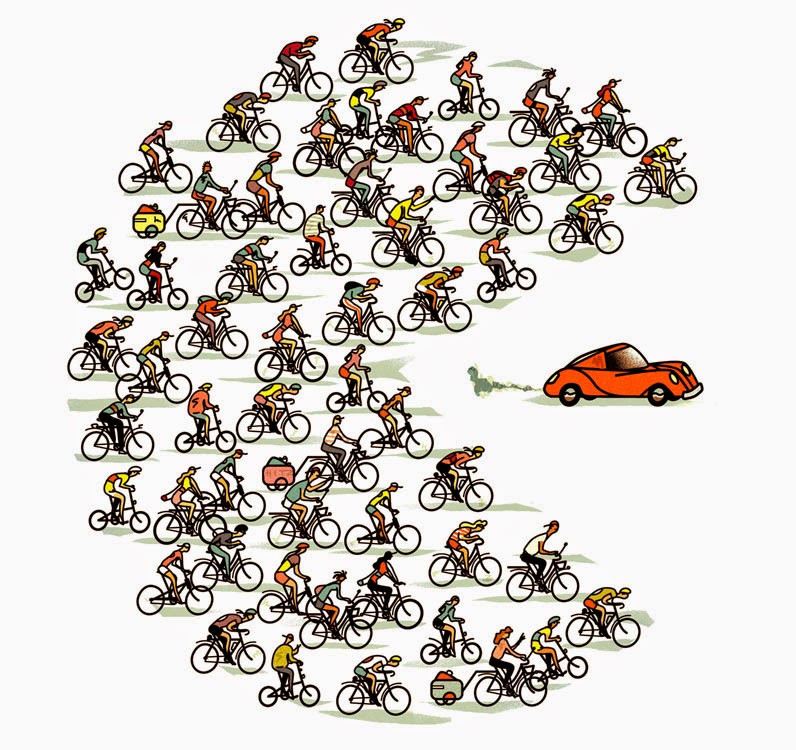 Posted by bikelovejones at 4:01 PM