As I struggle with the ups and downs of my new career as a freelancer, there are times I consider the possibility that I will have to return to the bicycle industry to pick up at least some part-time work to pay the bills. And I suppose that reality has been lurking in the back of my mind all along; how else to explain the fact that I've kept up my technical reading and tried to understand how things like disc brakes and shocks work?

Still, it occurs to me that getting back in may be harder than I thought, in part because of those newer technologies.

When I worked at Citybikes, I almost never touched a disc brake and never opened up a shock fork. It was a shop policy that we wouldn't work on shocks, period (and in fact, we'd try and persuade the customers to "upgrade" to rigid forks on any bike used for transportation). And at the time, we didn't have a ton of bikes with disc brakes.

Well, that is changing.

Today the bicycle industry is slapping discs on anything that moves, including mid-level commuter bikes. And in this one instance, Jan Heine (of Bicycle Quarterly) and I are in total agreement: disc brakes for commuting and touring bikes are pretty much pointless. Yes, thee are exceptions, like fatty bikes in the snow and downhill racing bikes; but most people just don't do that kind of riding in everyday life. (Does anyone remember when everyone went out and bought a mountain bike in the early 90s, only to find five years later that they'd put slicks and fenders on it because they never went off-road? This is kinda like that.)

The downside of this is that Jan and I are in a shrinking minority, as more and more folks are drinking the kool-aid and insisting that they need disc brakes on their daily rides.

There's nothing inherently "wrong" with disc brakes. It's just that they are really unnecessary for city bikes, and in certain conditions they actually lag behind rim brakes in efficiency and modulation. They also weigh a lot more, cost more and are fussier by far to maintain and adjust than cantilever rim brakes. And yet, if I work in a shop today, not only will I need to know how to service all sorts of disc brakes, I will have to talk about them like they're the best thing since striped pajamas.

To my thinking, it's just one more vestige of an industry that depends on people buying new stuff every year in order to remain profitable. Only problem is that, in their quest for profits, too many bike and component manufacturers end up looking ridiculous at best and conspiratorial at worst.

So I am handing out my resume at shops where it's less likely that I will be working exclusively on brand-new bikes. The number of shops in that category is shrinking as more of their owners recognize that there's less money in used bikes (unless you're the Community Cycling Center, which has super-low overhead as a non-profit and has jacked up their prices to match those of Citybikes and Better Cycle). But I digress.

In short, the industry marches ever onward, and at some point I will either stop trying to play catch-up or simply get too old to do that sort of work anymore. Either way, it's a cue for me to march ever onward myself, even if it puts my feet on a different -- and admittedly contrarian -- path. 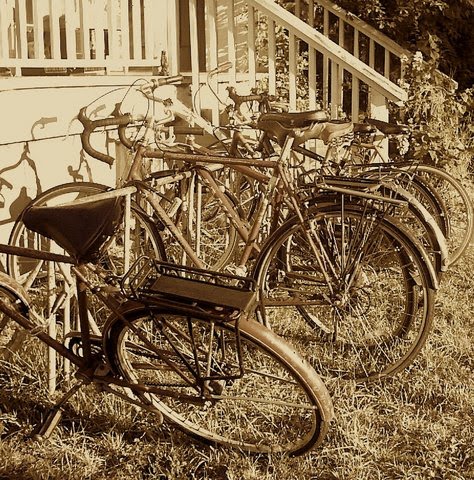 (Not a disc brake in the bunch.)
Posted by bikelovejones at 9:55 AM