I invited Slug Velo alumni and their friends who get the concept to join me for a mellow, slug-paced bike ride. Not wanting to be totally responsible, I advised that this would be a leaderless ride, and that if found a route and decided we didn't like it, we'd veer and go somewhere else.

Four riders on recumbents met me downtown at the Starbucks on 4th. We perused the three Portland By Bike maps I'd downloaded and selected the one that would take us out the Springwater Corridor path. The day began cloudy and cool, cool enough that I needed all the layers I'd brought; but by the time we'd gotten out to around SE 47th I had removed my wool sweater and did the rest of the ride in shirtsleeves. We meandered along the Springwater path, talking with whomever we fell in alongside, then switching up the order and chatting with someone else. We followed the route -- Springwater South to Springwater East, all the way to 126th. While much of outer eastside Portland remains a little down-at-heel, with large grass fields dotted by the occasional single-wide mobile home or home-based machine shop or what-have-you, housing scarcity closer in had forced increased development in Lents and beyond, with rowhouses springing up along paved streets that were once little more than gravel roads. We stopped to check out one property for sale that would surely sell for over half a million dollars -- in an area where the smallest older houses went for no more than around $45,000 a decade ago. Gentrification has reared its expensive head in outer east Portland.

We chose to loop back along 130th, and then zig-zagged through residential neighborhoods on streets marked as "Neighborhood Greenways" -- the new name for Bike Boulevards, apparently. Here and there, I could see evidence of a racial diversity that had not existed here twenty years ago, but which has now become the norm as more families of color are forced out of inner NE Portland by development and ridiculously high rents (a one-bedroom apartment in the Sabin neighborhood -- if you can find one that hasn't been torn down in favor of freestanding houses and duplexes -- now averages around $1,200/month; a studio goes for close to $1,000. That's absurd in a town with no living wage policy). I wondered silently how long we'd be able to live where we do now, and what we'd do if a spike in property taxes or some other radical change forced us out of our little house. It's possible such a change would force us out of Portland altogether. It's become a little San Francisco here, and it makes me sad and a little worried.

We rode along tree-lined streets and past parks filled with soccer-playing kids until we came to the I-205 bike path, which took us north all the way to Burnside. From there, we cruised along Burnside down to the  Hollywood district and Grant Park, where we turned and headed north again to Tillamook. I enjoyed the sight of the first roses opening up -- we had a warm winter, so I suspect that most of the city's roses will be in full bloom just in time for Rose Festival -- and crows swooping and cawing at us from overhead as we rode through their "turf". The clouds had burned off and the day had warmed up considerably. It was smooth sailing down Tillamook to N. Williams Avenue, where my friends peeled off to head to an event at the Widmer pub while I continued north on Williams to get home.

A side-note: I wore regular clothes for this ride. A t-shirt, an oxford shirt and a thin wool sweater, plus swrve knickers and Chrome sneakers (non-SPD). My only concession to bikey-gear was to wear Andiamos underneath my knickers. I normally just wear plain old undies when I ride around town, but on longer rides a little padding is not a bad idea.

At the end of the ride, I note that my feet do not hurt and other than a little tweakiness in my right knee I feel fine. In short, I discover that I don't need stiff-soled cycling shoes and that, in fact, sneakers are actually more comfortable. Especially when I ride with flat pedals, which I do almost all the time now. I imagine that when I get home I will probably get rid of the last of my truly bikey attire -- shorts, jerseys, shoes -- because today I realize I don't need any of it to enjoy riding my bike.
(But I think I'll keep the Andiamos. They DO come in handy.)

I rode a lot more than I'd intended to; but that was made a little easier by riding with other folks. Total was a little more than 30 miles and now I'm headed for a well-deserved nap. 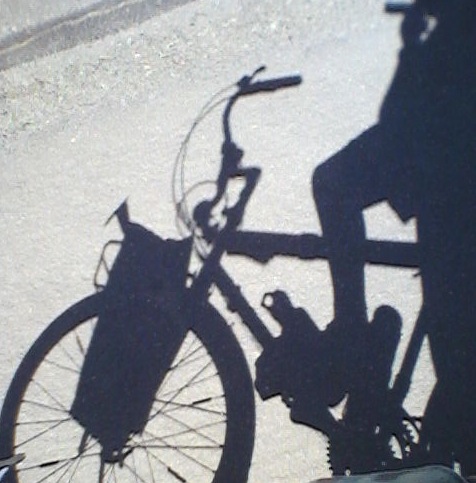 Posted by bikelovejones at 2:35 PM