If you're in Portland and want to have more fun than a typical, stuffy Mother's Day brunch will provide, come on down to Sunday Parkways East. The City of Portland will close a seven-mile loop to motorized traffic and give free passage to human-powered transportation. The loop passes several city parks, each offering fun activities and food carts. Parkways runs from 11am till 4 pm.

There are still volunteer slots available -- the City needs hundreds of volunteers to make Parkways safe, fun and successful. Check the web page for details, or show up tomorrow morning at 10 am to help out at an intersection along the route.

Sunday Parkways was started in 2008, inspired by Bogota, Columbia's Ciclovia which closed miles of city streets to motor traffic and became a world-famous event. Since then, hundreds of cities in dozens of countries around the world have created similar events on a monthly or weekly basis during the summer months. (Bogota's Ciclovia event still runs every Sunday and on state holidays year-round.)

(Below: Sunday Parkways North, back in 2009. I've volunteered at Parkways every year since its inception as a Rolling Wrench, and I'll be doing it again this year at least once, maybe twice. See you on the street!) 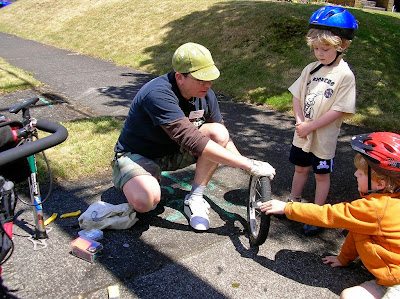 Posted by bikelovejones at 11:44 AM