After two weeks off the bike and most of a week being sick, I was antsy to get outside again. The snow melted enough today that I felt comfortable riding the BStone around town. Although I was feeling considerably better, I decided to shorten my ride by taking MAX most of the way there and back. The total of four miles in the brisk air felt like enough when I was done. 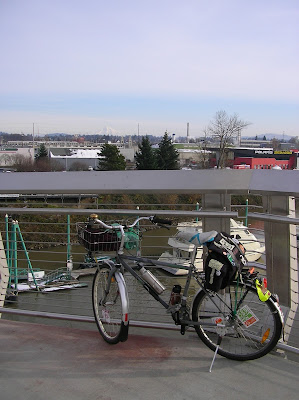 I hopped the MAX to the west end of Tillkum Crossing, stopped in Starbucks for some coffee and rode across the bridge. It was very cold, maybe 38F, and mostly sunny. A beautiful day for a little ride!

(At left: It's hard to see, but that's the top of a snow-covered Mt. Hood in the distance.)

I rode to Rivelo, where a delayed holiday event was taking place. It had been delayed by a day because John [Bennett, Rivelo's founder and owner] had taken a bad fall yesterday and ended up breaking his wrist.

He was in good spirits, considering the pain meds and egg nog on hand (plus optional bourbon or rum add-ins for the grown-ups).

I had a delightful time chatting with John and Darby, and enjoyed meeting two delightful little boys who are full of energy, sweetness and giggles.  While I was there, I took a few pictures and got myself a limited edition Shawn Granton-designed Rivelo hankie. 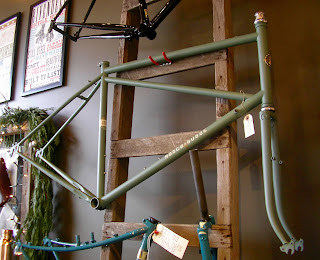 I also picked up a new elastic netting for my bike basket. The netting on the BStone's basket, originally designed for a motorcycle, was too big and had begun to lose its spring. Basket netting is VERY handy, allowing you to overstuff your bike basket while also leaving key things grabbable on the ride (like hankies or gloves, for instance). A useful item available at Rivelo and lots of other bike shops around town.

(Above: the Rosco Bubbe frameset, a wacky design by Grant and Co. Honestly, I'm not sure what it's for, except maybe the tallest riders.) 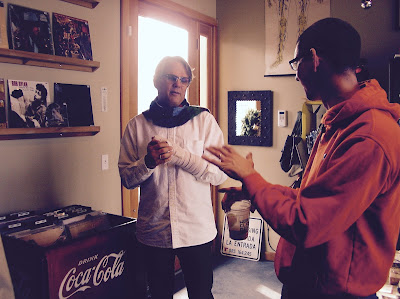 John, gesticulating carefully while waiting for the pain meds to kick in. I advised him to lay in a supply of newspaper delivery baggies; speaking from experience, they're perfect for covering an arm cast during a shower. Just slip it on, rubber-band the opening to your arm, and go.)
John isn't sure what will need to happen. He's seeing a specialist and hopefully will know more soon. But breaking bones sucks. So if you're in town, stop by the shop during biz hours (check the web site), say hello and cheer him up. He's good people and I like what he's about. 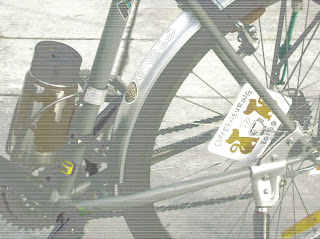 (Left: my latest bike-dedicated coffee mug. It holds less coffee, but it will do. And my doc says I ought to think about consuming less coffee anyway. Hmm.)

Below: the new hankie. I got it because I like everything Shawn draws and I wanted to support his art. 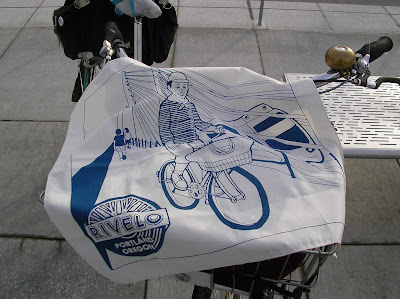 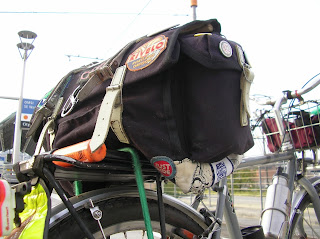 It felt SO GOOD to get out today, if only for a couple of hours and even though I wasn't entirely done coughing out the last phase of my cold. Still, I will be glad when the temps go up tomorrow, back to above 40F. Even if it's raining it will be better for riding in.
Cheers!
Posted by bikelovejones at 4:25 PM