Now that my music crowdfunder is complete and I am recovering from a throat infection, I'm beginning to tackle the few bikes that were waiting for me since I got home from kansas a month ago.
This one was a donation from the fellas at Velo Cult. Originally a city bike with 120mm spacing in back and a Nexus-8 rear hub, When I got it it was running on replacement wheels of different sizes and nothing worked.
After a lots of modifications, including converting the bike to a 1 x 7 (and spreading the frame to take a 135-spaced rear hub), the bike is now ridable. The integrated headset is a mess and if I open it up and it falls totally apart I'm stuck with a bike I cannot afford to deal with. For the time being, I've decided to go with a slightly-too-tight adjustment to get rid of most of the front brake judder, pour in some Phil's and hope it will be okay for now. 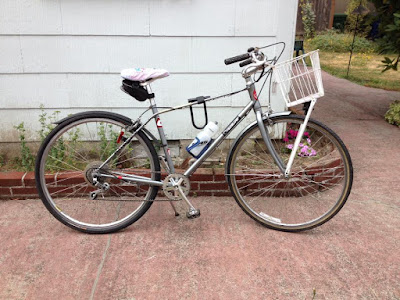 I really cannot stand integrated headsets for basic city bikes. They're a dumb idea. Perhaps the previous owner thought so, too and that's why this became a donor bike for my project. Anyway, it's safe to ride at this point and that means someone gets a bike who didn't have one before.

I am sometimes forced to make compromises like that.

Right now in the stand I have a very tall Peugeot road bike from the 1970s, with original Simplex shifters and derailleurs that work astonishingly fine. I left them on, swapped in some upright handlebars and added a rear rack. I need to go to Bike Farm tomorrow and find a cheap used seatpost to fit the frame and a cheap used front tire, and it's basically all done.

After that, I have two other bikes, both rusty mountain bikes from the late 80s/early 90s. One is so rusty that I may need to strip and rattle-can it -- and I don't know if I want to take the time to do that with all my music commitments coming up in late summer/early fall -- but my other option is to strip the parts for another frame. Gonna sit on this one awhile, I think.
The other bike isn't quite as rusty and needs a few replacement parts, and I will probably try to whip that one into shape when the Peugeot is done.

This week we're expecting a serious heat wave in Portland, with temps today through Friday eaching into the 100s. Sweetie and I will be doing whatever we can in the early morning hours before its gets too hot; and later we'll seek out a city water fountain or a cheap movie with air conditioning. My riding will be minimal, if I do any at all. Not a safe time to ride a bike if you have issues with extreme heat, as I do.

Hopefully it's cooler where you are -- happy riding!
Posted by bikelovejones at 3:10 AM