As of today, I've got four completed bikes that will be picked up this afternoon for handoff to Catholic Charities, where they will be distributed to newly arrived refugee families needing affordable transportation.

Just finished this one today: 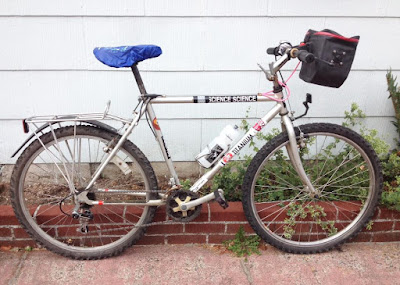 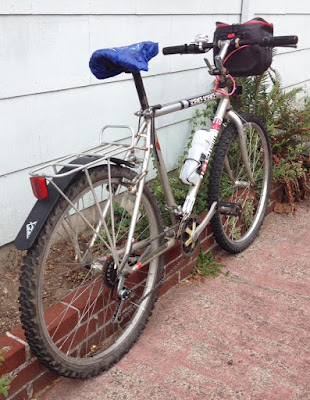 I scored this back in May at the neighborhood cleanup drop-off site, after gently arguing with an entire family of scrap metal haulers (kids as young as six were helping out and I suspect that's how the family paid its bills). The head of the household told me, "we got dibs on basically every bike someone leaves here."

I verified this with the Neighborhood Association coordinator, who went over to the man and told him she had promised no such thing, and if I wanted to take home one or two bikes to fix up for charity, where was the harm in that?

The man did not appear to be embarrassed at all, simply annoyed that he'd have to share.

I took this bike and two more. One was so badly rusted inside, with a frozen stem and seatpost, that I decided to strip off everything useable for other bikes. The other two bikes, a tall Peugeot road bike and this old Giant, tuned up into decent, rideable bikes. (Note: I cover all finished bikes with random stickers and/or reflective tape to hide the brand names and hopefully reduce the risk of theft by people who know something about bikes.)


I'm especially pleased with this one. It was a bit of a mess, covered with rust and requiring replacement wheels, seat and handlebars. (The wheels came from the stripped-down bike).
I also swapped out the GripShift because, well, I just detest them unless they are basically new.
I decided to toss on a pair of stem shifters -- friction, of course -- that would work just fine and leave space on the handlebar for a bell and a handlebar bag. Everything else loosened up pretty nicely once I applied lube and let it soak in for a couple of days.
This bike would have ended up getting hauled to a metal recycling depot and dismantled, with anything non-metal bits going to the landfill. I was glad to save this bike and make it rideable again.
Is it cost-effective for a shop? Nope.
But it's just fine for me to do as a hobby, on my own time. Plus, it gives me a chance to keep my hand in things and do some bike-related problem-solving.


I am taking a short break from wrenching from now through the end of September, for the Jewish High Holy Days. I'll resume wrenching in early October.
Happy riding.
Posted by bikelovejones at 1:23 PM

"Friction, of course" I love it. I've slowly un-indexed all my bikes after playing around with too many types of indexed shifters. Love following the refugee bike updates. Not sure if you've already connected with them or need materials, but I know Bikes for Humanity works with Catholic Charities to give kids' bikes, and I know they're currently overwhelmed with bikes/parts--- tap them for those if you need anything, they'll be happy that someone is putting parts to good use. -anna

Great to know! Thanks, Anna!