So things are evolving here at the Brain Trust.

The refugee resettlement program is officially on hiatus until immigration is re-opened (which doesn't seem likely as long as Trump remains in the White House).

So I am now shifting my focus.

I still need old, dead bikes for parts, for repairs. I am shifting my focus to assisting those on the ground in protesting actions. Some have had their bikes confiscated. Others have lost them in sweeps taking place right now in downtown.
The fact is that, while I am medically unable to protest myself right now, I can still support the efforts of those who are protesting.

So I am shifting my bike repair skills to focus on those protestors and indie journalists who are putting themselves in harm's way to show the world how bad police brutality has gotten here.
I know this may repel some of my readers, those who support a law-and-order approach to public safety that is answering concerns from the 1950's. Fine. I can live with your absence.

I cannot continue to live in such a schizo way, trying to camouflage my politics with spurts of online shopping and voting while I continue to refine ways to support this movement for peace and justice.
So I'm going public.
If you're a Portland indie journalist covering the protests and you need bicycle help, reach out to me.
If you're a protestor whose bike got damaged or taken during a police action, reach out to me. I want to support your work by getting you back on two wheels.

Rubber side down, friends! 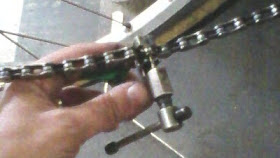 Posted by bikelovejones at 10:06 AM