I'm off my bike for awhile

I had the first of two eye surgeries yesterday, to remove cataracts and to have a partial corneal transplant done in each eye. This week, I am focusing on following doctor's orders so I can be up and ready for the Jewish High Holy Days, which begin Friday evening.
The first surgery went smoothly and healing has begun. I had my first of three post-op exams this morning and everything looks good. However, there are obvious restrictions on self-propelled transportation for awhile. I will need a minimum of two months before we can schedule the surgery on my other eye; then another two months to know how that has gone; and another month or two after THAT before I can be fitten with a new eyeglass prescription. Since I will still need eyeglasses to ride my bike, that means I may be off my bike for most of the next four months. It's possible that I may be able to ride a little around my immediate neighborhood during November -- the second surgery is set for sometime in December -- and if I can I'll certainly take advantage of that window. After my second surgery it could be that I just barely slide into riding again in time for #30daysofbiking in April.

I'm fairly certain I won't be able to officially enter this year's Coffeeneuring Challenge, but I'll be happy with at least a few little januts around the block during that time anyway.

When I'm able to see a little better, I'll be spending some time in the Bran Trust, trying to clear out the last of the donations (either by stripping them for parts or by building them up into ridable bikes). Right now, with everything pofficial on ahiatus, I may just take one or two of those remaining bikes and park it by a large homeless encampment with a "free" sign on it. SOMEbody ought to be able to ride this fall, right?

And I'll post occasional things here, including more explorations into tools (both modern and vintage) and maybe a couple of instructional posts for the newbies to bicycle self-care.
So stick around. After the end of this month I'll definitely be back for sure.

Be safe out on the road and let's all take care of each other, okay?

Thanks and happy riding! 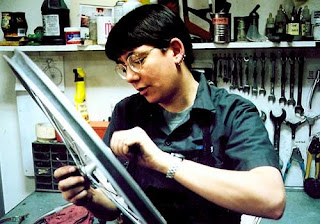 Posted by bikelovejones at 8:20 PM