In the last week I've had several great discussions about the future of cargo-biking, with designers, builders and sales reps. Out of those discussions has come my own desire for someone to produce a cargo bike that would retail, fully-built, for under $1,000.
I want to see this happen because I think cargo biking is definitely part of the future of sustainable cities, but there just won't be enough buy-in until we make the bikes affordable for a larger segment of the bike-riding public.

There are basically three ways to go, design-wise: 2-wheeled front-loader, 2-wheeled rear-loader and 3- or 4-wheeled cycletruck. Of these three, the first is probably the easiest to own from a logistical and storage standpoint.

Here's an example of a front-loading 2-wheeler, created by Portland framebuilder Joseph Ahearne: 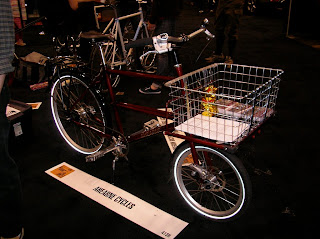 Here's an example of a rear-loading cargo bike (this is my Surly Big Dummy): 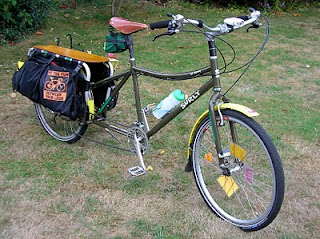 And this is an example of a cycletruck -- this is an older model called the Brox that I discovered when I first began working in a bike shop. At the time most of the bike lanes in Portland weren't wide enough to accommodate this vehicle, but I dreamed of owning one for a long time: 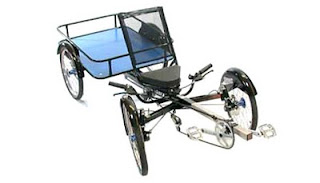 The deal with all of these cargo bikes is that they are fairly expensive for the average bike rider. By average I mean someone who could not imagine spending more than several hundred dollars on a sturdy, go-everywhere, do-everything bicycle, even one they'd use as daily transportation. The cheapest of these bikes fully-built will cost about $2,000; the most expensive (The Brox) runs around $4,500 including import fees (it's a UK product). And that's where the average bike rider will turn on his heel and go back out the door.

So this week I began having discussions with a couple of dealer reps and told them I want their companies to consider designing a cargo bike that would retail for under $1,000, fully-built and ready to ride.

A few changes to bring the price down would include:

--V-brakes instead of disc brakes (but make sure the frame has fittings for both kinds of brakes to give the owner a choice);
--Flat pedals
--Basic drive-train with alpine triple cranks and 7- or 8-speed cassette and derailleurs (internally-geared hubs are great but the decent ones cost more than an externally-geared drive-train and don't offer the same range of gears)

I'd also suggest making a thorn-proof inner tube standard for the rear tire to reduce the likelihood of roadside repairs, which can be time-consuming for a cargo bike.

I'm happy to report that both of the companies whose reps I spoke to ARE discussing adding cargo bikes to their line-ups. One has gone as far as to produce a prototype of a rear-loading model that would retail for around $800, complete. I've see pictures and it bears a strong resemblance to the Surly Big Dummy (though the frame's main triangles are a little different). It even accepts the Xtracycle bags and snap-deck.
The other company isn't as far along in development and I'm hoping they might consider a short-wheelbase, front-loading model.

I think if we can get the price down, then more folks would consider buying a cargo bike instead of a used car. What do you think? Discuss.
Posted by bikelovejones at 9:25 AM

Hey
Just been reading about cargo bikes and you're right they will be the transport in years to come,
Especially after this pandemic,
Chris from the UK