why drumming is different: geeking out 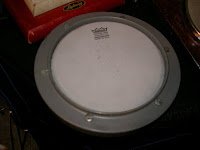 (This music-related post in memory of my mom, who laughed when I told her I wanted to learn to play drums -- and then I presented her with a bag of cotton balls for her ears. She laughed again every time she looked at the bag of cotton balls, every day for over a week; and the fact that she got it is one of my favorite memories of her. She would've turned 75 today.)

Since I resumed drumming a couple of years ago, I've been able to find some of the things I had as a kid -- don't we all do this from time to time? -- and in my decision to own them again I've stumbled across a very interesting point.

This (above) is the practice pad I had as a kid (the actual one from 1973, I'd saved it all these years and got a replacement head for it when I began playing again). As a ten-year-old beginning rudimental drummer, it never occurred to me to think about the fact that, while my classmates in fifth-grade band were practicing on their actual flutes. clarinets and trumpets, I was practicing on a six-inch practice pad that was supposed to have the same feel as a drum, but without the volume. In short, I was practicing on a device specifically designed for practice, rather than for performance -- and this small reality sets me apart from every other musician in the band or orchestra.

Sure, bagpipers have practice chanters -- could you imagine your kid practicing at home on the entire set? -- but as far as I know no one else in the traditional band or orchestra gets to learn on a practice device besides the drummer-percussionist. And that, I realized, is significant. That realization, along with the requirement that most of my drumming at home happens on a practice pad, has led me to begin collecting vintage practice pads in earnest. Since last spring I've assembled a nice little collection of pads from the 1940's through the present day. 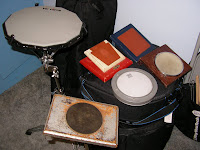 Collecting vintage drums and all their accompanying ephemera is a hobby that has been around for a long time. One of the most famous drum collectors these days is Bun E. Carlos, the drummer for the band Cheap Trick, who has dozens of rooms in his rock-star-sized house given over to storage and display of vintage drums and has done tons of research on the history of modern drums and drum manufacture. I simply don't have the space -- or the money, frankly -- to collect vintage drums; but practice pads are smaller and take up far less room. The other benefit is that, being less popular among collectors, they're easier and cheaper to find. (Though, if someone ever uncovers existence of a Ludwig Black Beauty Model Practice Pad, I'm probably screwed. If that happens I will never be able to afford collecting pads anymore.) And there' the uber-geeky element of collecting a musical item that's never seen on a performance stage. (Years ago I had a surly high school student who was going through an angry phase in life, and performed his rudimental drum solo at district solo contest on a practice pad, seated at a table. He was unrepentant even after being dressed down by his drum instructor, his band director and the adjudicator; but I digress.)

Beginning my research on the history of the practice pad, I've come across a few patents (courtesy of Google Patents). None so far have shown anything that looks like a practice pad I grew up with. A fellow over at Vintage Drum Forums helped me obtain a bunch of CD-roms with photocopies of dozens of old drum catalogs, which have proved more helpful in dating the collections of practice pads I've assembled.

And now the fun begins. In my spare time (which I will have a little more of as my busy season winds down) I will begin researching the history of, specifically, the drum parctice pad. The most interesting documentation I've found so far is a patent from around 1953, showing a practice pad set that is clearly the inspiration for the modern practice drum kit and referencing an earlier patent from 1915 (which I have yet to find):

This promises to get geekier.
Posted by bikelovejones at 8:55 AM