Since my goal this time around is to go to places I've never visited in previous Challenges, I decided to see if gentrification has had an effect on the coffee economy here in Portland.
So the first thing I did was look up -- what else? -- Dunkin' Donuts.
People who are not from Portland rave about Dunkin's coffee. A colleague in southern California who's originally from New York still goes out of his way to hit the drive-thru at his local Dunkin's on the way to work.
How would a place like Dunkin' Donuts fare, I asked myself,  in a town with dozens of independent coffee roasters?
Not well.

Checking Dunkin's online search for retailers, I see that there currently exist in Oregon exactly TWO Dunkin' Donuts locations, one each in Portland and Gresham. (A third location in Salem is listed as having closed.) Obviously, this list is woefully out of date: several restaurant guides list either one, or none, left in Oregon at all.
But I digress.

Because if I have to ride all the way out to the suburbs to find sad coffee it's not gonna happen.
The closest approximation to sad coffee in my part of the world seems to be -- yup -- Starbucks.
But not just ANY Starbucks will do. In order for the coffee to really sad, it has to be located in a sad environment.
So on Tuesday morning, before Yom Kippur, I went to the Starbucks counter inside my local Safeway store at MLK and NE Ainsworth. (I took my #4 on Tuesday because I knew that by the time Thursday and Friday rolled around I would either be trying to build a sukkah in the rain and wind, or just hanging out at home hiding from the rain and wind.)

When a Starbucks counter is tucked inside Safeway, you have to admit that's pretty sad.
And, to my thinking, an excellent indicator of just how [expletive deleted]-ing twee Portland has become. 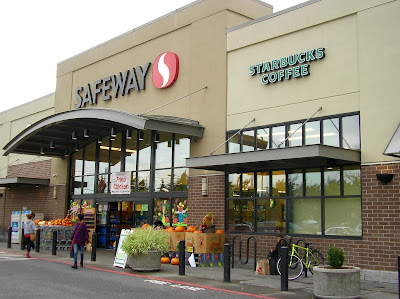 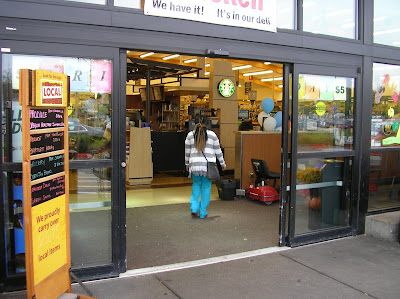 Let's make it sadder still: I found an old Starbucks card that a former employer had given me on Teacher Appreciation Day three years ago. I was given the card in the spring. Two weeks later, they told me they would not renew my contract. I tossed the card n a file drawer and forgot about it.
When I retrieved it for this coffeeneuring run, I learned that it had a whopping total of five bucks on it.
Five bucks worth of coffee.
To show the teachers how much they were appreciated.
That is pretty damned sad if you ask me.

So, to do the card -- and the memory of the aforementioned employer -- some justice, I spent it here. All of it. I got a big thermal cup of foofy coffee drink (Mocha with whipped cream) and some baked goods. That left me with about twenty cents on the card. I left it on the counter and walked away. 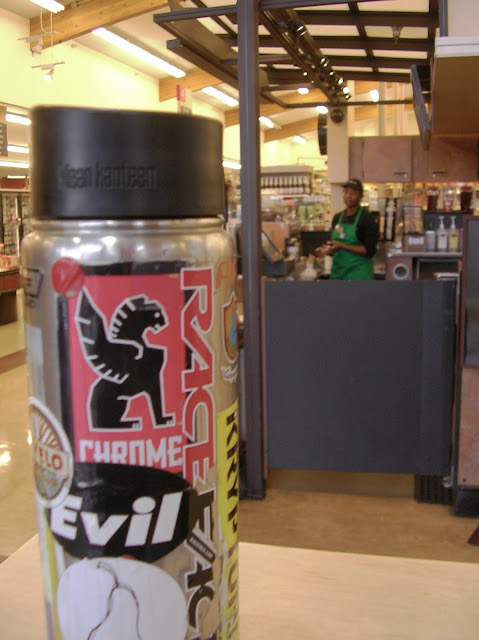 To make things the saddest yet, there was nowhere to sit and drink my coffee. The tables and chairs that were once there had been removed to discourage loitering by any of the thousands of Portland's homeless people with whom I share the sidewalks on any given day.
So I stood near the entryway to the store, sipped my coffee, and pondered the meaning of sadness in the world.


The ride before and after helped remove some of the stain of sadness.
I felt much better when I finally got home.
I promise future rides this year will not be as sad. Really.
Posted by bikelovejones at 9:17 AM