Working at a grassroots nonprofit, I don't usually have the option of going to a warehouse shelf and pulling the exact replacement parts I need. This hybrid came in with a broken canti boss in the fork. Being a budget-level variety, the boss couldn't be unscrewed from the fork blade. So our only option was to replace the fork. Unfortunately, there was nothing on hand with a long enough steer tube (to fit the frame) that would also fit a 700c hybrid wheel.

So that's when I suggested we keep the original fork and convert it to a dual-pivot sidepull brake.

It was fairly simple. Saw off what was left of the mangled boss; saw off the other boss, still intact; file the surface flat; touch up with some nail polish and then mount the sidepull brake, which should clear the boss platforms easily. 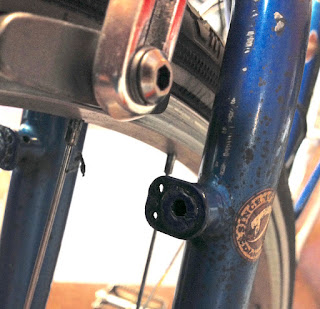 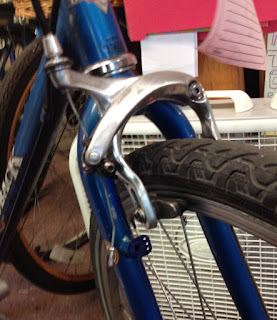 If this were a for-profit bike shop, I'd never even be able to suggest this repair. Cosmetically it wuld fall far short of most shops' standards. If the cosmetics didn't stop a service manager, the potential for liability would.
To which I'd say: WHAT liability? The brake worked just fine, and stopped the bike quite well on its test rides.
This fallback on cosmetics and liability concerns is, of course, driven by a bicycle industry that is all about planned obsolesence in the name of Selling More Stuff.

We have enough stuff in the world as it is. We shouldn't be in such a rush to make more, in the name of profits or even to support more workers. (Let's teach people how to reuse and repair things first, yes?)

And this is yet another reason I'm happy not to be a wage-slave in a for-profit bike shop these days.
Happy riding.
Posted by bikelovejones at 6:37 PM