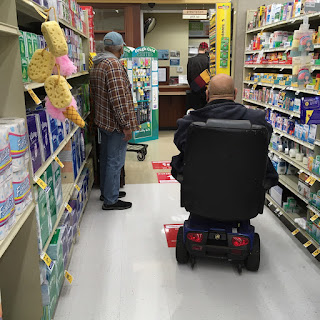 This is more likely a candidate for January's Errandonnering festival, but I had to do it now.
It was past time for my flu shot. Not usually a huge deal, except for folks like me who are immuno-compromised and therefore need to take a little more care.
So I rode over to Safeway Pharmacy and stood in line.

The Pharmacy is inside the grocery store, and when you're waiting your turn you have to stand in a line that goes down an aisle, everyone spaced six feet apart and masked.

This did not make me feel noticeably safer. But this being Medicaid, you take what you can get, and give thanks that it's available and affordable. That's my One Good Thing today.

So I waited in line, filled out a form, handed it in and was shown to a small waiting room next to the Pharmacy counter. Where I waited a little more until the Phmaricy tech came in and gave my shot. The whole thing probably took 45 minutes, with most of that just waiting. 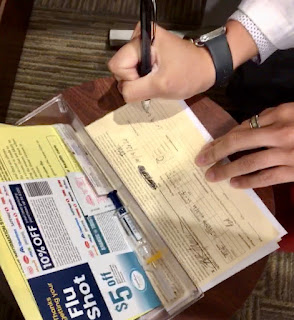 When I was done, I had a nice new band-aid on my left arm, and was ready to head out.

There was nothing else pressing this morning, so I stopped in at Starbuck's across the street to get an Iced Foofy Drink, which I enjoyed on the ride and finished at home. 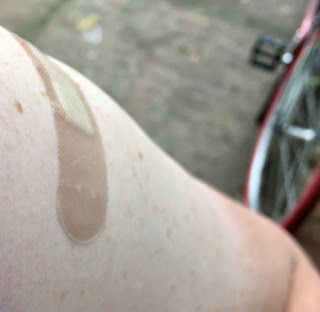 I often pass this intersection on my neighborhood loop. It's home to a former mom-and-pop store that was pushed out of business when the 7-11 went in across the intersection. This is the shape of things around here, and everywhere I guess. Gentrification removes local color of all kinds, and replaces it with monoculture.

The longtime locals have responded to this in some colorful ways. 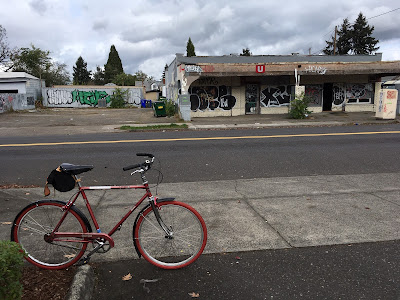 I use the still-empty store as a marker of sorts. I've lived in the neighborhood for almost two decades, and I figure that when someone is finally able to develop this lot, the gentrification process here will be nearly complete.

It's a shame. There's no way corporate culture will allow the small, local shops to compete with their franchises, so out they go.
This one was simply driven out of business by 7-11's lower prices and longer open hours. Sometimes that's really all it takes.

When I got home, I did a little more tweaking on my "new" singlespeed, which I'm really enjoying on my neighborhood rides. I swapped in a more comfortable saddle and added a safety triangle in back.

Bikehack: If your safety triangle won't hang flat because the vinyl has scrunched up, simply use a section of spoke to hold the bottom edge straight. It also adds a tiny bit of weight to keep the thing from flapping too hard, and improves visibility from the rear. 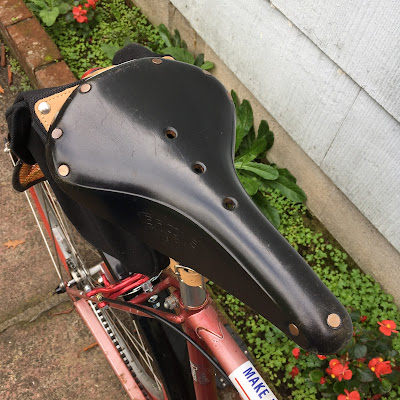 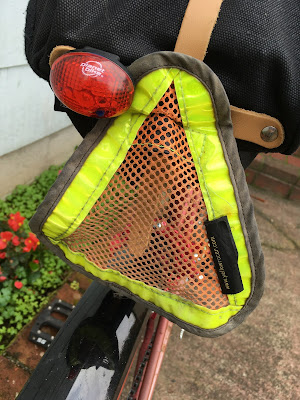 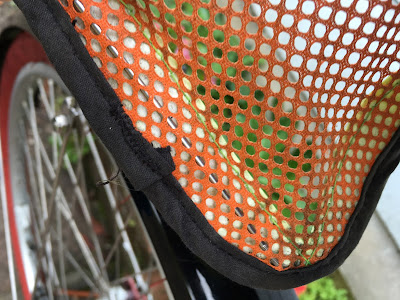 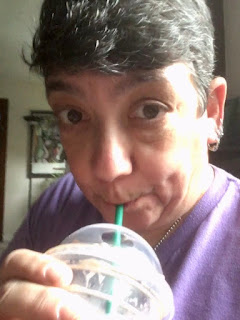 Next weekend, the weather's supposed to turn quite cold but remain fairly dry, a perfect opportunity for a longer ride and maybe some migratory fowl sightings if I'm lucky.
Happy riding!
Posted by bikelovejones at 5:39 PM