Yesterday I noticed that someone was selling a smallish bench vise in the want ads.
I messaged him to ask if he would deliver it for a few bucks more. We agreed on a price, and he delivered it today.
I had to clean up and shore up the left end of my homemade work bench. 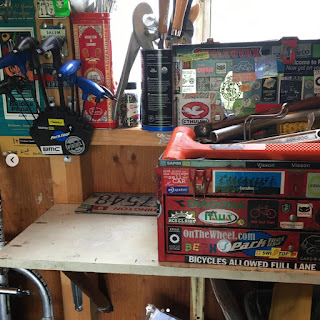 That took some time, as I had to remove the tiny hand-cranked wheel grinder that was there, sort and put away the random parts that had been sitting there for ages, and wipe down the surface. Then, I had to install a cover for the "dammit" gap at the back of the bench top.

Since my workspace isn't insulated, I have to trim license plates to fit into the spaces between the studs. It works well enough and is sturdy enough for me to place lightweight plastic tubs back there if I want. Mostly it keeps me from dropping things behind the bench and yelling "dammit" -- which is what I usually do before I then have to remove shelves and tubs from below to get at whatever I dropped. 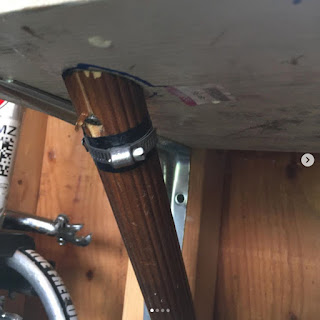 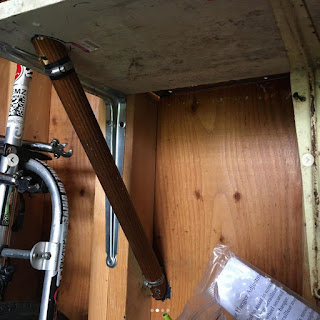 Then, because I didn't have a space 2 x 4 sitting around, I decided to make do (for now, anyway) with a section of closet rod, trimmed to fit under the left side of the bench at an angle and screwed into the underside and the back wall for extra support. I didn't know how big the vie would be or how much it would weigh, but I wanted to be able to try mounting it if it would fit.

Not long after I got this set up, the seller delivered the vise, an older Wilton that was light enough to carry with one hand, but heavy enough to handle popping freewheels off and similar tasks.
I would ultimately need to add some support by scrounging up a length of 2 x 4 and cutting it to fit vertically under the bench, as I'd done on the other end of the bench. But for now installing the vise was straightforward.

I rode over to the local lumber yard for the right size bolts, washers and locknuts I'd need.
My largest drill bit is 1/4" so I drilled holes and then burred them out a little to expand them. I figured if I was careful I could thread the bolts into the holes and they'd screw in snugly.
Then I could atached the washers and nuts underneath and tighten everything down.

The finished vise will be a great addition to my workspace. I'm glad I waited until I could find a good one that would last. 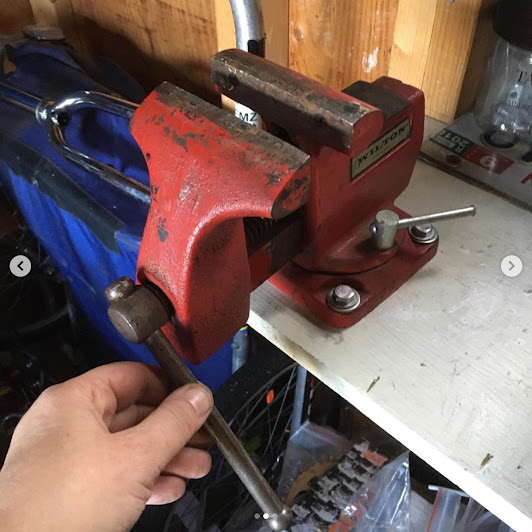 Posted by bikelovejones at 10:41 PM