(Toe update: it doesn't appear to be broken and this morning I can wiggle it. It's not quite as painful as it was yesterday but still a bit sore. I will spend the day mostly off my feet and hope that helps. Thanks to all who wrote.)

A couple of months ago, I had the opportunity to order a new Rivendell product for a price that would be lower than the actual retail. The catch was that I had to be willing to buy sight unseen. Meaning only a vague description and no other details. The description was something like, "I'd wanted to produce this item back in the day and actually designed it years ago but couldn't bring it out until now..."

The price was within my budget and I'd come into a tiny bit of "play" money, and I like supporting Rivendell when I can, so I bit. What arrived in the mail a couple of weeks later was a flat piece of orange ripstop nylon with a cutout at the top that made the thing look like an enormous bib. It was a windscreen, something to put on without having to don a whole jacket and clearly designed by someone who lives in California (because when it's cold enough for a windbreaker in northwest Oregon you generally need the whole jacket).

I stared hard at this massive orange bib. What had I just blown twenty bucks on?

I stuffed it in my bike bag and promised myself to give it a try soon.

Two weeks later I had my chance. The forecast had called for early morning drizzle followed by clearing and sunbreaks, meaning that my full-on rain jacket would be overkill for most of the day. The rain had stopped when I was ready to ride to work and it had warmed up to the high 50's. I pulled out the windshield and put it on. 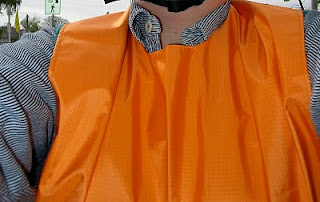 (self-portrait at arm's length, with MUSA railroad shirt underneath.)

First of all, it's big. Really big, like for a guy who's at least six feet tall (and remember that guys generally have longer torsos, so it was big and long). Obviously designed for the fellas, or for an extremely well-endowed woman. At 5' 7" and of merely average build, I am too small to fill it out convincingly.

Second, it's well-made, using windstopper fabric that isn't waterproof but would certainly be drizzle-resistant and sewn with durable thread and clean, finished seams. In Oregon the "water-resistant" possibility almost doesn't matter, since drizzle up here is often a prelude to steady rain, but I digress.

Third, the thing really IS cut like a large bib, with two neck pieces that wraps over the shoulders and around the back of the neck and tie together with an elastic cord. There's another elastic cord at the bottom, which is designed to attach to -- what, the handlebars? The bottom buttons of one's shirt? -- it's just not clear. Being small enough to get away with it, I pulled the cord taught and was just able to tie it around the back of my waist in a small bow. This seemed to work well enough and was certainly better than tying the bottom to my handlebars. (I will replace the bottom cord with a much longer shoelace and tie it around my back in future uses.)

Finally -- it looks goofy as hell. Since this was promised in the advance press I don't feel cheated in the slightest. I got what was advertised. But I do feel mildly weird wearing this thing in public. The weirdness is offset by the fact that, well, the thing actually works. it keeps the worst of the wind off your front, which means you stay warmer on the ride without getting overheated.

So is it a smashing success? and will I use it again? Sort of-maybe-a little, and probably.

Here's another shot of someone else wearing the windshield (I've cropped out most of the rider's face to protect his privacy): 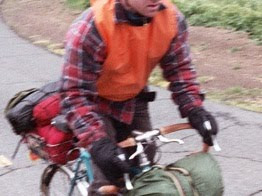 I've included this photo so that you'll understand why this fits a slightly larger guy much better than it fits me. On him, it actually looks kind of sensible, and looks like it actually belongs in his kit of useful bikey things. On me, it's just too big; and I'll probably do some alterations in order to get more use out of it. Once the alterations are finished I expect this garment to make a LOT more sense for me, and I expect I'll use it more after that.

I would say that this garment makes a lot of sense if you live in places where it doesn't rain as many months of the year, and where cool, breezy mornings are the norm. (Um, Chicagoans, rejoice?) It also makes a good middle layer underneath a jacket on colder mornings. In short, it's a sensible accessory that will fit nicely in my bag (it packs down small and flat) and will be handy when I need it. So it's money not wasted after all. (Retail price after The Grand Unveiling went to $24. Available at http://www.rivbike.com.)
Posted by bikelovejones at 9:28 AM