The owners of Portland International Raceway, who allow us to use their infield for short-track racing every summer, move piles of dirt around as they need to in order to mantain their motocross course. Last year, they left some dirt in the "singletrack" area, arranged in neat little berms that made for a delicious, off-camber rhythm section through the trees, or, depending on how you went at it, a stack of baby whoopdees. Lots of fun. There was also an enormous mountain of sand and pea gravel mixed together out on the Back Forty that we sometimes got routed over as well. This year, there had been the tabletop -- presumably, what was left of the larger mountain of stuff with most of the pea gravel removed, and shoveled over to a spot closer to the moto course -- and it had been the source of endless challenges and fun for me and just about everyone else during the first four weeks of racing.

When I arrived at PIR, I noticed two things: First, a fresh layer of fine, sandy dirt had been laid over the moto course that made for very mushy going if you picked a bad line (which I did through most of my practice lap). Secondly, the tabletop was gone. I mean it pretty much disappeared; what was left was a sad little bumpy pile with the course run through it, and more telltale tire ruts dug deep into the sandy leftovers wherever someone rode a bad line.

I was sad. I loved the tabletop, had called it my friend, had forgiven it for last week's crash, and now it was gone without so much as a goodbye.

In its place, course designer Tad B. had dreamed up a wicked -- and long -- twisty, back-and-forth head trip through the moto track, turning it into the main feature of the race instead of just a part of it. The worst/best part: in the middle of the moto course, a steep, sudden drop sent you downhill into a hard right where you hoped you wouldn't go off the course and hit the ribbon; as soon as you managed to stay on course you had to immediately accelerate so you could ascend the backside of the drop and turn hard left, almost off-camber, to get out of the little "hole" and back onto a straighter, flatter section. A surprising number of riders had difficulty managing this section without having to dismount -- or at least stop and change direction astride their bikes. The rest of the course wasn't much easier. Even the Cat I/Pro racers were finishing their practice laps and rolling their eyes at me while telling me it was the hardest course of the series. Pal Ron S., grinning as I rode past him, told me it was possibly the "best" course he'd ever seen at PIR short-track (Ron is basically a 61-year-old whippet, and regularly finishes ahead of much younger men who've just aged up into the Master 45's category in which they race. If he didn't race -- and welcome other people to the activity -- with such unfailing cheerfulness and encouragement we might all hate him; but in fact we all adore him and some of us secretly wish he was OUR dad or grandpa.)

I hoped I would be able to manage two laps when the actual racing began. I'd done a 20-mile pre-ride of the Garden Tour route the day before and I felt tired. Still, I was happy to be there, happy to be out playing in the dirt on Stompy. I ran several warmup laps in the parking lot, enjoying conversation with a few singlespeed riders who'd all come back from Mt. Bike Oregon (formerly the Fat Tire Festival) in Oakridge the night before. If I was tired, they had to be fried after four days of mountain biking in central Oregon.

While lined up waiting to start, I suggested to Kristin that the singlespeed women somehow meet up after the race to try and have a picture taken together. She thought that was an excellent idea and immediately began yelling at the other women singlespeeders to meet after our race.

The race itself, was ridiculously hard. The race organizer who'd talked with me last week (about catting down to Beginner Women) was following the racers, and got ahead of me as I fell totally and completely behind the pack within a minute of starting. He fell behind me and began shouting suggestions to me about how to find a good line and handle the especially touch terrain of the course. I found his coaching simultaneously annoying and helpful. I appreciated his help but also just wanted to be left alone to ride my personal race. Eventually he left me to watch the race from a high berm on the moto track. I told him I was fine and just wanted to keep going. But the course was SO difficult that every tracky turn slowed me down more; I simply did not have the strength or endurance to stay on my bike over the tallest berms or through the nasty middle section; and I kept having to get off and run with my bike in those spots. On a positive note: I didn't need to suck my inhaler at all and I only stopped to catch my breath twice in the entire race. 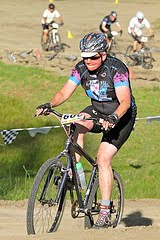 Still, when the bell began ringing to signal the final lap, I was not positioned well. I was about three quarters through my third full lap and knew that I would not be allowed to finish a fourth; I'd most likely be pulled from the race before I had a chance to even leave the singletrack and get back onto the moto course. So I made the decision to leave the course after my third lap. As I crossed the line, the announcer said there was about two minutes of official time left, and I knew my choice had been correct; I could not have completed a full fourth lap without getting pulled in two or three minutes' time. I crossed the line, pulled off the course, stopped to catch my breath, and slowly rolled to the officials' table to let Candi know I was done. She smiled, asked how I was, and I told her my body was done but my brain wanted more. She told me I'd get credit for my three laps and that she was glad to see me out racing.

Before long, Kristin found me at the finish area and we hugged. "We won!" she said. Kristin's philosophy is that, just by doing it, she's a winner, no matter what her official placing ends up being. It's a good philosophy; and I've adopted it for myself. I came, I raced, I finished; therefore I won.

After posing with several other women in my category for photos I had a wonderful discussion with Susan from the Showers Pass team. A Cat I racer who decided to try singlespeed this year, She'd been forced to "cat up" a couple of seasons ago when, as a Cat II, she'd been beating other women in her age group fairly consistently. The difference between Cat II and Cat I was huge, though; and she was "treading water" just to hang with the pack. In Womens' Singlespeed, however, she thought she actually had a chance of making the podium at the end of the series -- a first for her. She thanked me for helping to get the category started. I thanked her for racing it each week, and we both smiled. This was exactly what I had hoped for -- by separating the Singlespeed category by gender, a woman could race singlespeed, get credit for it, and have a chance to make the podium for her efforts. Even if it would never be me, who cared? It would be sweet for me to see the three women stand atop the podium on August 2 and know that my agitation played in role in helping that come about. I found myself looking forward to the last two races of the series. I want to see how it all ends, like the end of an exciting action movie.

Final results were posted this morning. I got 7th Place -- out of 7, of course -- and was given full credit for my three laps. How the other women managed four and five laps I will never know. Moving up two places from last week means that we only had seven women racing this week instead of the nine we saw last week, so I'm a little disappointed.

Odd as it sounds I would kill to place 15th in the category on Closing Night.
That would mean some serious growth.

This morning I am not terribly sore, but feeling VERY tired, tired enough that I am considering skipping my race next week if the Garden Tour takes a lot out of me. I will probably just not sign up until Monday at the race so I can decide either way.
Posted by bikelovejones at 6:47 AM