The morning after the final race of the PIR short-track series finds me groggy, no doubt the result of doing two races (ok, one and a half) in one night.

I had a good night at short-track yesterday. Sweetie and my sister both came to watch my race, sitting in the grandstands and screaming my name each time I came into the moto track area. At one point I could hear Sweetie ringing her cowbell for me as I passed. It was hard. I was in no better shape than I had been at the beginning of the season, or it least it felt that way. I stopped to catch my breath or push my bike up to the top of a berm after losing pedaling momentum, and then I'd have to wait for an opening to get back in the race without getting hit by one of the many faster riders coming up behind me. Frankly, what I did out there did not really look like racing. But I did it, and I did not quit, even though my gasping lungs really, really wanted me to at times.

And, with the help of legal stimulants -- Nossa Familia was giving away free iced mochas to all the racers and I slammed one shortly before my warm-up -- I did manage to finish what I thought was three laps, on a challenging but fun course. 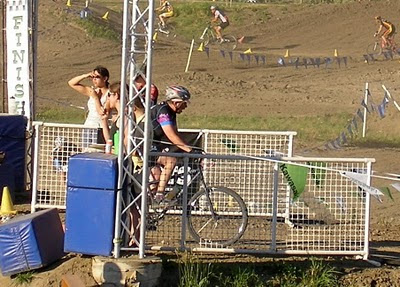 Why I was given credit only for two is unclear; I'll have to contact the officials and find out what happened, or if I was just hallucinating that third lap. Anyway, I finished exactly in the right place -- after the bell had stopped ringing for the leaders -- and my effort felt honest, complete and satisfying. Kristin, Shawn and I hugged and celebrated the completion of a fun series afterwards. It's nice to have made some new bikey friends and I look forward to seeing them at Cross Crusade.

I had plenty of time to recover and hang out before the Ultra-Short Track Team Relay, which was good, because if I hadn't I would surely had given my number to someone else. Les Volontaires acquitted itself admirably, even with my slow lap around the moto course. Women and juniors were instructed to take a hard left turn in order to stay inside the moto course the whole time, while the men were told to go outside the fence and take a slightly longer route around the back of the moto course. It was all in fun and the atmosphere at the relay area was slightly crazy, with riders positioning themselves to begin pedaling as their teammates reentered the moto area, arms swinging wildly as riders looked around to get the tag so they could take their turn on the course. In the end, I had a wild time and was glad I'd decided to do the relay.

(two Les Volontaires about to tag in at the relay race. I'm behind/between them, waiting my turn.) 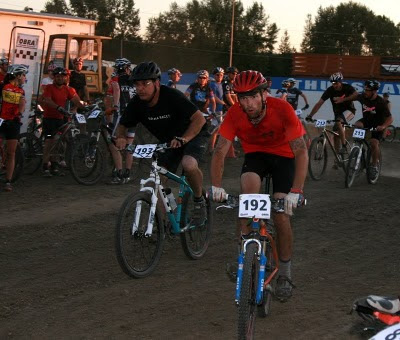 I stuck around to watch the podium announcements, and cheered loudly as Shawn wound up surprising everyone by taking the top spot in Womens' Singlespeed. (Susan of Showers Pass and Sharon of Team Beer got second and third.) Kristin and I cheered and whistled loudly as the winners were given their medals and prizes (coffee and beer, of course -- this is Portland); and afterwards we promised each other we'd bring our singlespeed mountain bikes -- flat bars and all -- to Cross Crusade and, in true singlespeed fashion, "run what we brung".

I got 7th place in my final race of the series. I don't yet know where I ended up in the series standings but I think it's probably 5th or 6th (out of the eight who completed five or more races).

I'm doubtful that there will be separate categories for singlespeed men and women at Cross Crusade -- the fields are simply too large for the organizer to want to add another layer of administration and he has already hinted that it's "not likely" -- which means I'll have to choose between going back to Beginner Women, moving over to my masters age group (45+, where I'll get creamed), or racing singlespeed with 300 men (where I'll get creamed). I need to think about it.

On the plus side, I recently scored a wind trainer through work, and found some exercises online that I can play with. I figured I'd set it up in the shed with the All-Rounder, and try it out and see how it works. If I can handle it, I'd do intervals on it once a week from the end of short-track season to the beginning of Cross Crusade and see if even that small amount of time helps me at all. I still have no idea what I'm doing, I only know that I want to feel stronger when I finish my races, and I don't want my having Crohn's to be an excuse unless it's unavoidable.

This is where being part of a "syndicate" is hard, because as the only Bella in town I have no teammates to train with, and it is hard to know what to do on my own. Still, I have to try, if only to see if ANY training, no matter how poorly organized, can make a difference. Another racer last week suggested that a month of intervals helped him prepare for short-track this year, so maybe it's possible for me to see similar benefits.

Anyway, I feel sorry that the PIR series is over; glad that it went about as well as it could for me (considering my multiple spring illnesses and a general lack of knowing how to train), and hoping I can find a way to gain a little strength before cross season starts. Most of all, I am happy that women responded to my energy and signed up to race in a new Womens' Singlespeed category. I hope that it will become a regular offering at future short-track races, even if it never catches on in 'cross.

My next -- and last -- short-track race of the season will be OBRA Championships in two weeks.
Posted by bikelovejones at 7:36 AM