1. At the starting line. The Womens' Singlespeed field was 15 strong... 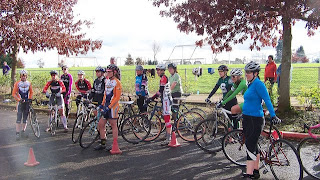 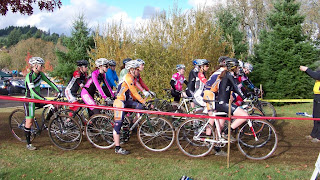 3. Pretty sure this was my second lap. This drop-down, the only one of the course, should have delighted me; but by the time my 1 pm race was underway, several previous heats had degraded the course to the point where there were no decent lines left and it got a little dangerous. Pick the wrong line and you'd go into the tree at the bottom left of the track. I watched someone do this on my first lap as I was on way out to that section and he hit it head-on, pretty hard. I missed the tree every time, but it was a blind drop until you were right over it and it was a little scary. 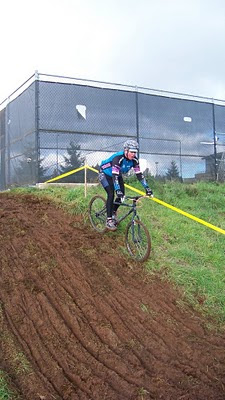 This morning my body is reminding me that actually, I did crash, during my warmup. It was near the end of my hot laps, I was feeling fairly loose and, in preparation for the curb hops that I knew were part of the course, I decided to hop the curb near the tent and Mielle's car. I mis-timed the hop-up of my rear wheel, the tire caught the slippery curb in just the right place and began to fishtail out from under me -- and I absolutely bit it. I landed on the grass just above the curb, partly on my hip and partly on my backside, against both the curb and the waterbottle in my jersey pocket. Ow! Still, I had to laugh, and I did, right out loud, turning heads and causing a few smiles among the onlookers who had witnessed what became my graceful attempt at a pratfall.

I assume there will be a bruise there at some point.

The rest of me feels quite tired, wiped out actually. Stompy is still in the shed, as dirty as when Mielle brought me home last night. If I don't get to it today -- and I may not, if it stays cold and I feel pooped -- then I will take it to work tomorrow and give it some TLC at the end of my shift.
Posted by bikelovejones at 9:50 AM