I had spent the morning off puttering on a bike project and lost track of time. So between that and carving out time to rehearse for an upcoming gig (https://www.facebook.com/events/405726299492653/) I had to really dash to squeeze in a Coffee trip.
I decided to try again for the Starbucks at NE Ainsworth and MLK.  (https://foursquare.com/v/starbucks/4b1efd65f964a520912224e3) Turns out that last week my cyclometer's battery had fizzled and my mileage was off by half a mile. So in fact, the Starbucks is at least a mile from home. Barely. 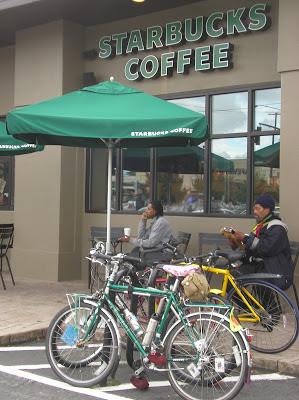 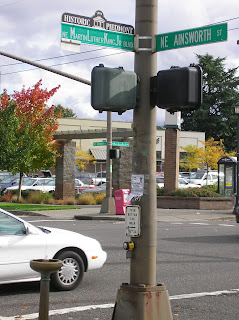 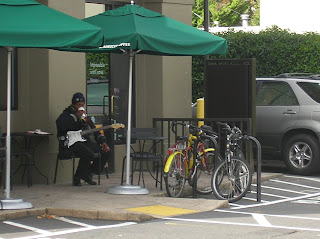 Mister Guitar Dude hangs out in front of this Starbucks all day long, alternating between strumming his Stratocaster copy and thumbing a worn Bible. He glowered at me while I locked up my bike. (He often does that, too. I have learned not to attempt to disarm him by saying hello.)

I raced home with time to spare for the afternoon's rehearsal. Total mileage: 2.2 miles.
Posted by bikelovejones at 2:45 PM