I finally had an opportunity to go coffeeneuring with a friend today!

Lynne (of http://lynnerides.blogspot.com/ fame) agreed to meet me downtown. She lives on the west side and I live in North Portland, so meeting in the middle at Saint Cupcake (SW 13th and Morrison, downtown Portland, roughly six miles from my house) seemed like a fine idea.
With me underemployed and her retired, I chose to do Friday as one of my two days this week.

After a lovely cup of coffee during which we caught up on things and Lynne knitted a few rows (and then maybe un-knitted them, I'm not sure), we saddled up and made our way down to Waterfront Park, choosing to ride around the back side of Riverplace to get to the Tillicum Crossing bridge.

This was my first time approaching the bridge from the west side of the river. Signage was pretty good and bike signals helped us get through some of the busiest intersections. Riding over the bridge on a weekday was delightful; not a lot of people and a sunny but not-too-warm day gave us plenty of excuses to stop and take photos. 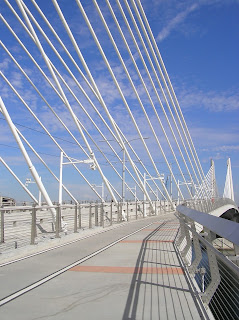 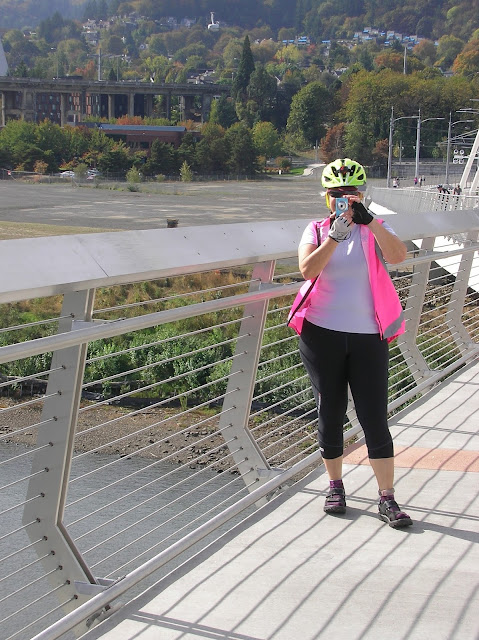 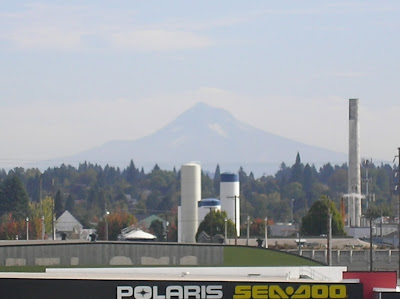 We stopped a few times along the way to take photos and giggle with delight at home lovely the day was. We could see Mt. Hood through the haze.

At the other end of the bridge, we stopped in at Rivelo so Lynne could buy a pair of cotton crocheted gloves. We ended up meeting a fellow from the Rivendell owners listgroup, and it's always nice to stop in and say hi to John, Rivelo's proprietor.

From there, we wondered where we might go. Lynne suggested the Springwater-South bike-ped path, and I readily agreed. The path was nice and smooth, and I enjoyed the soft hum of my tires rolling over it while Lynne and I talked about her trip bicycling along parts of the eastern seaboard. We got to Sellwood Riverfront Park and Lynne suggested we ride up into Sellwood proper for a bite to eat. I recommended Mike's Killer Burgers (SE 17th & Tacoma), where we enjoyed delicious blue-cheese burgers and fries. 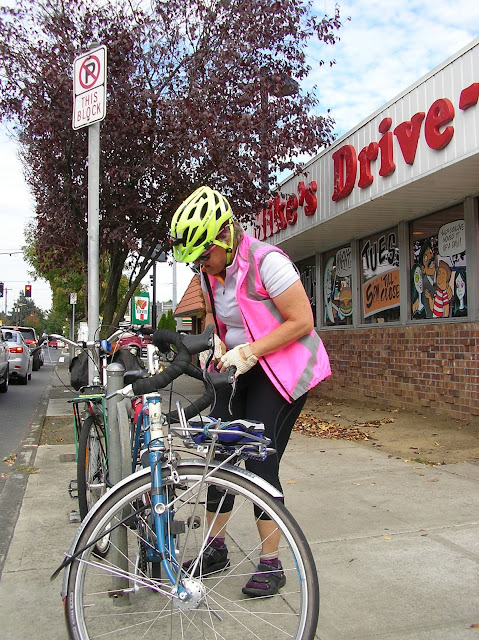 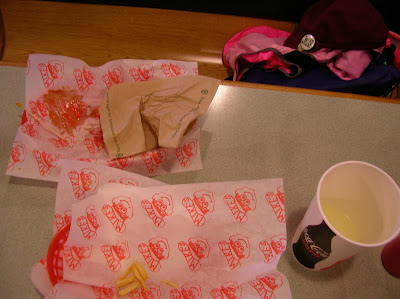 We parted ways after lunch; it was nearly 2 pm and I'd promised Sweetie I'd be home in time to get ready for whatever we wanted to do for Shabbat. We agreed not to wait so long before the next coffee ride.

I rode home along 17th, since traffic was pretty light and I'd just beat the worst of the pre-rush hour frenzy back to NE Portland. The weather was partly cloudy and not too warm. I was comfortable in my thin wool jersey and sneakers. Riding the Bridgestone is a delight, a good climber and nimble handler when I needed to hop a curb.

I no longer use a cyclometer so when I got home I figured out my mileage with a map. It came to a little over 17 miles ridden. It would have been closer to twenty but my knee was acting up so I shortened my trip home by hopping a bus up the incline along MLK.
A few more photos can be found at my Flickr page.
Cheers!
Posted by bikelovejones at 5:01 PM