for load hauling, a bicycle trailer can't be beat

For awhile, I had a longtail cargo bike. I tried to make it work for me; but when I loaded it up the balance got so wobbly I couldn't feel safe. After three years, I gave up and went back to what I used to have: a Burley two-seater kiddie trailer. 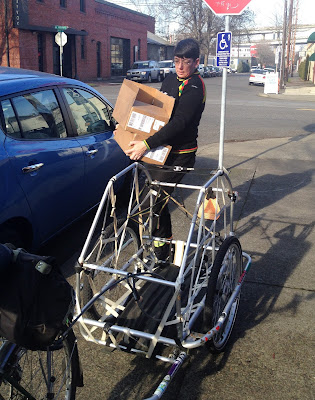 The first trailer I got post-cargo bike was basically nothing more than the metal framework. I bought some used wheels and scavenged a bunch of heavy nylon webbing at construction sites, enough to weave a passable floor and sides. I installed a hitch from a dead trailer and basically cobbled the whole thing together. I used that trailer for almost nine months, until it was stolen from behind the shed where I kept it locked. They cut the lock and took the trailer. I was bummed.
After that trailer got stolen, I looked far and wide for a replacement. I wasn't really up for starting all over again and cobbling together another trailer from various bits. So I spent two months looking everywhere -- eBay, craigslist, want ads, yard sales -- until I found a rather old and weather-worn Burly kiddie trailer. It, too, needed some work and a rain cover, but otherwise it was all there and for a price I could afford.

I added a few things to make it suit my needs, and found a raincover from another make and model trailer online for a few bucks. I had an old snap kit from when I worked in the shop and we sold Burley products; I used it to add some snaps to the rain cover so it would fit the trailer better.

Yesterday, I had to run a few errands with the trailer, including buying two bags of wood pellets and picking up a large stack of cardboard from the neighborhood bike shop. Along the way I scavenged at several "free" piles around the neighborhood and came away with a few nice finds, including some organizers for my bike magazines and a vntage Strawberry Shortcake thermos that I'll flip to some collector.

I picked the cardboard last, and strapped it on top with some bungee cords. The total load came to around 100 lbs, which is the upper end of what Burley officially rated this trailer to carry back in the day. (The pellet bags were 40 lbs each and the cardboard was around 10-15 lbs, the sundries made up the rest.) 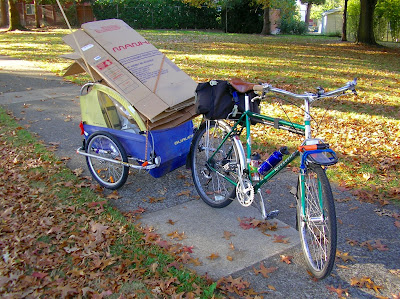 (above) The Rivendell, looking decidedly UN-glamorous in front of a trailer. But it's a perfect bike for the purpose. 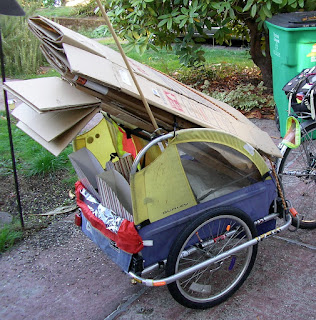 Riding with a trailer is SO much more stable and steady than a two-wheeled cargo bike. As long as my brakes are in good shape, stopping is not a problem; and I never go so fast with a loaded trailer that speed becomes an issue, anyway. And this particular model folds flat so I can store it indoors, away from thieves and weather. 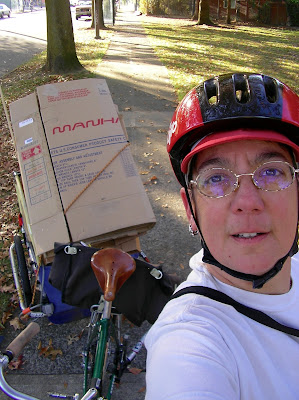 The other nice thing about a trailer is that it presents such a wide pictures to motorists they they tend to cut a wider berth around it when they pass me.
I'll take the three feet however I can get it.

(Update: After nearly three weeks of wrestling with wild hormonal mood swings, I am physically and mentally exhausted. Still, I'm looking forward to another round of Coffeeneuring with a friend this weekend. Stay tuned.)
Posted by bikelovejones at 8:19 PM