i took a break. i may take more. but for now, i'm still loving my bicycle life.

I made a few calls, reached out and asked for help, sought resources to help me make my next steps.
It really helped, and although I am still tired, I feel better.
So today, after a leisurely morning with Sweetie, I decided that, while it was too cold and I felt too tired to ride my bike, sitting on a stool and doing some light puttering would be a good thing to do.
So I went out to the Bicycle Brain Trust and straightened up a bit. Then I grabbed a pair of old mountain bike wheels I'd gotten as a donation, and took a closer look at them.

Single-walled rims, stainless spokes, high-flange hubs. These were original on some bike from the 1980's -- nothing spectacular, but nothing super awful either. The front wheel looked like it would be fine with just some lube and a light touch in the truing stand, but the rear wheel's hub bearings felt horrible and I knew I'd need to open it up to inspect further.

Turns out that the wheel had been outfitted with cheap raced bearings.
I took the hub apart, and saw that the races (the metal hoops that hold the bearings in place) were a mess and that some bearings had either disintegrated or fallen out completely from years of inattention. The bearing grease had turned to a hard sludge that required a small screwdriver to scrape out before fresh grease could be applied. 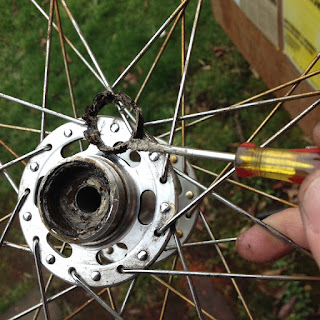 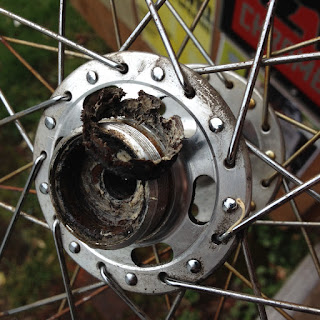 On the drive side of the hub, the dustcap was so malformed that it was basically useless for retaining bearings, and I had to replace it with a used one from my drawer of bits.

Looking closely at the bearing races, the drive side race was empty of its bearings -- I assumed they'd all fallen out -- while the non-drive side race still had some left. I removed both races and tossed them into the recycling bin.

When I was learning how to fix bikes years ago, the shop I worked at was guided by a strong re-use/recycle ethos, meaning that if anything could be repaired and reused, that was usually preferable to simply slapping on new part every time. That ethos continues to guide my work as a bicycle hobbyist and volunteer today. I clean, sort and save old parts with the hope of reusing them on another bike down the road. That includes bearings, which I would rescue from the trap in the bottom of the shop's parts washer. When I had enough to fill a small coffee can, I'd toss them in pour some solvent over them, and swicsh them around for several minutes to get rid of the worst of the sludge that still clung to them.
Then, I'd transfer them to an old mesh noddle strainer and swirl them around for a few minutes more. Finally I'd put them into small bottles, take them home and label them as recycled. I've collected quite a supply of these old bearings, mostly 1/4" for use in rear hubs and bottom brackets. When a job calls for an overhaul but the hub or bottom bracket shows wear,and the bike is either a donation or a repair job for someone with limited funds, I'll use my recycled bearings and some thick red grease to get the bike back on the road.

I would never do this in a shop.

But then, repairing bikes in a shop has changed so much in just the last decade that most shop mechanics would rather replace an entire wheel than overhaulthe existing hub, especially if the rim shows wear as well.  Most shops today won't even take in certain old bikes for repair at all, knowing that a full overhaul on something so old will be a money-loser (based on the shop's hourly labor rates). It's simply easier -- and cheaper, for a shop -- to replace rather than repair.

This is why today's mechanics aren't being taught how to overhaul internally-geared hubs (today's hubs aren't designed to be overhauled, anyway) or take apart and replace individual cassette or freewheel cogs (again, it's cheap and faster to replace the whole thing -- and new bikes don't come with freewheels anyway). 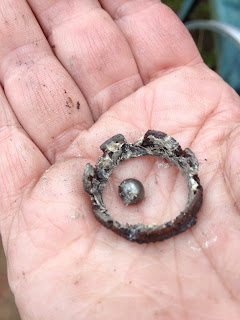 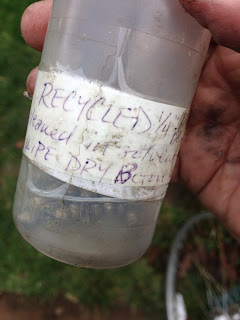 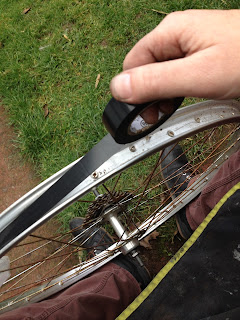 After I finished overhauling the hub, I considered my options for procuring a rim strip -- so I could mount a tire and tube. Single-walled rims generally do well with a simply rubber rim strip, available at any shop. But they don't last, and unless they're in really good shape when they get to me, I don't save them. It's not ideal to use thicker cloth tape in a single-walled rim (the tube will malfom and if the cloth tape comes loose it can actually cause pinch flats).
So in the end, I added a couple layers of electrical tape. it's cheap, plentiful and lasts longer than a rubber strip anyway.

When I was done, I checked it in the truing stand and discovered that the wheels was basically straight and pretty consistently tension all around. I installed a used tire and tube and called it good.

I examined the front wheel of the pair, discovered that the bearings felt good and just needed a spot of lube, and took care of that. When I go up to the CCC tomorrow for Scrap Sunday, I'll check the bin for a free tire I can use on my front wheel and then I'll have a set of wheels ready to install on a refugee bike.


My love of repurposing, recycling and scavenging is a big part of why I much prefer being a hobbyist and volunteer mechanic today. After all my years in the industry, I got really disheartened by all the waste I saw, and vowed that if I ever set up a workshop of my own I'd dedicate some space to rescued, repaired parts. Although my space is quite limited, I've regretted that decision.
Now I just need to wait for a mountain bike frame to be donated that I can use these wheels on.

Beth, glad your feeling better, and interesting post on rebuilding the wheel with recycled parts.