In my ongoing efforts to share more of my middle finger with the bicycle industry, here's today's bike hack.

1. Stem shifters were ubiquitous on tens of thousands of entry- to mid-level bikes sold in the USA from the 1960's to the 1980's. Easier to reach than shifters placed on the downtube, they worked just fine -- so fine that, for a relatively brief period in the 1980's, at least three manufacturers (Suntour, Shimano and Simplex) were offering very nice stem shifters with an internal spring-loaded ratchet mechanism (Suntour's "Power ratchet" was the smoothest of the three). Before it all ended, there was even an indexing model with a friction option, just like the mountain bike thumbies had.

Of course, because this is the bicycle industry we're talking about here, stem shifters went the way of the dodo when "Brifters" (brake-shift combo road levers) trickled down from pro racers to bikes for the great unwashed (the rest of us). With everything at your fingertips, you never had to take your hand off the hoods until you went into the drops to sprint. While that makes plenty of sense for racers, for entry-level road and touring bikes it's pointless -- and wasteful -- overkill.

Never mind that brifters were far more vulnerable in a crash than stem or downtube shifters -- and, being made of a shockingly high percentage of plastic, far more delicate. Never mind that the complicated contortions often required for re-cabling brifters took away some of the best wrenching minutes of my life, never to return, while a lycra-clad customer fumed and fidgeted impatiently to get back on the road and finish his training ride to nowhere.
And finally, of course one brand was not easily compatible with another, meaning that you really had to work some serious voodoo to make your Shimano cogs and chain work with that Campy shifter. (And we used to joke that if you actually managed to make it work, rumor had it that one or the other company would send covert ops to kidnap you in the dead of night before you could tell other shop mechanics how you did it. Because planned obsolescence is the real patriotism.)

Since leaving the industry, I have made it my personal mission to avoid brifters like the plague on my home refurbishing projects. Not because they don't work -- they do -- but because it's not sustainable technology. Something that fragile and fussy has no business on any bicycle I lay my wrench on. Call me a crank, but since I mostly take old turds and turn them into real transportation, I have no worries.

Here's a lovely example of a refugee bike in progress. It came in with steel drops, suicide brake levers and a whole lot of rust. Since the bike is being turned into functional city transportation, off came the drops. But I saved the stem shifters, because they work and oh, hey! -- there's nothing wrong with them. 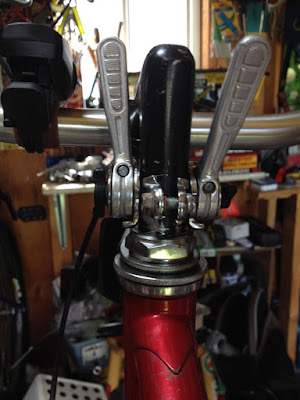 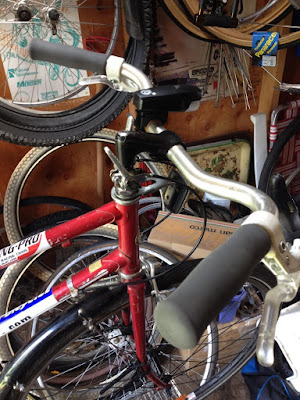 And look at how much room that leaves for a headlight or a bell. A very clean, classy look.


2. Cable stops, when and where you want them.
Here's a bike I recently sent off to Catholic Charities. A friend brought me the frameset with some parts, an ex-roommate's aborted fixie project. After taking off all the fixie bits, I rebuilt it as a multi-geared, practicel city bike. (Please notice the lovely stem shifters. Suntour Power Ratchets. They're pure friction,  incompatible with anything indexed and smooth like buttah. If you have any, I'll gladly accept them as donations for the cause.) 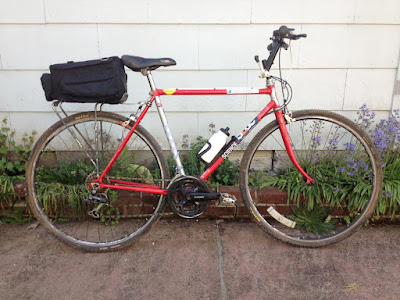 The frame had no hole drilled for a bottom bracket cable guide, meaning that, to use the front derailleur from my scrap pile, I'd have to fashion a seat-tube mounted cable stop with a short section of cable housing to make it all work.  Easy-peasy. 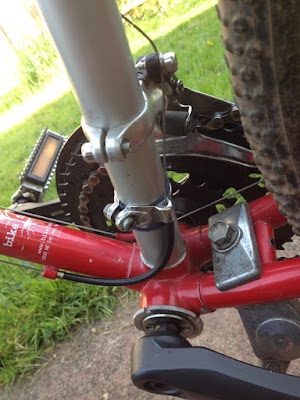 Helpful hints:
a. Wrap some cloth bar tape around the seat tube where you want the cable stop to go. The tape gives your clamp more purchase with less risk of stripping out the screw. 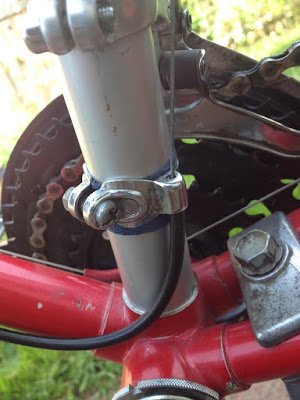 b. Make sure the unused side of the double stop is positioned so it won't interfere with the front derailleur function in any position. (I only mention this because some bikes with triples don't give you as much room to work with. I had to deal with this on one of my old bikes so I mention it now. You'll see in the photo that for this bike, it wasn't ever a problem.) 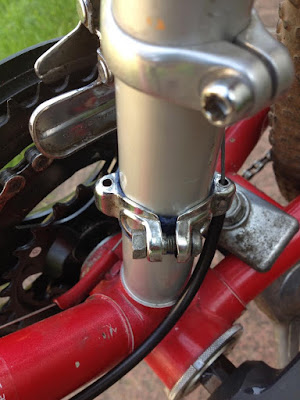 Dear Bicycle Industry: I'm disgusted with your insistence on pushing a trickle-down racing agenda in bicycle and component design. It's not "green", it's not cool and it sure as hell isn't sustainable. When coupled with your policy of purposely phasing out older technologies that still work just fine, it makes you all environmental pigs.
(Yeah, it's true, I never got over that conversation with my Shimano America rep back in the day where he chastised me and our shop for continuing to offer 5- and 6-speed freewheels, an "ancient" technology we had lots of demand for in our repair work, when our job was actually to stock and promote the newest bikes every year. Yes, he really said all that. So did his supervisor when I complained. Fuck you, Shimano. You murdered Suntour and now you're helping to murder the planet.)

Next time in Bike Hacks: Why disc brakes aren't the Second Coming.
Rubber side down, kids, and happy riding.

Posted by bikelovejones at 11:46 AM

You have so much great skill and creativity when it comes to bike hacks Beth. I know if is a labor of love for you to refurbish and (at times) totally rebuild bikes and donate them for people who need and use them for transportation. Seems your skills should somehow be compensated, but that is my bent not yours. You appear to love what you do and others are indeed the benefactor of your skills and labor. Nicely done Beth.

I do enjoy reading your blog,
Nancy

Nancy - thank you for your kind words.
After nearly twenty years working in the industry, I have little to show for it besides my skills and knowledge, and some tools I got on my shop discount. The truth is that, on the whole the bike industry isn't terribly interested in helping the poor; and even less interested in sustaining older bikes to keep them functioning and out of the landfill.

My views are based on my time working in shops where I saw increasing amounts of waste in the process of building up and repairing bikes; and also on the five seasons I spent as a low-level mountain bike racer, disgusted by the excess and waste at the elite levels of the sport.

While I am proud of all I learned and accomlished as a professional mechanic, the work I do now fulfills me and sustains me in ways my professional career never could.

Today, there are almost NO shops in Portland where you can get your old frame straightened, or even have your dropouts spread to take an extra cog. Bike shops don't want the time-suck those jobs involve, nor do they want to deal with the liability if a cold-set frame fails (extremely rare, and almost NEVER happens if a shop mechanic knows what s/he's doing).

While making money is a good thing, the fact is that bike shop work is for young people who are positioned to live on peanuts while they punish their bodies with 10-hour shifts at a repair stand. I did that for a long time. In my fifties, I simply can't do it anymore. Fixing bikes on my own time, as a hobby, allows me to take a rest when I need it; and provides a nice change from the equally fulfilling work I do in music and education. Plus, I know my bikes will be ridden by adults as practical transportation, and that makes me happier than anything. Thanks for reading, and happy riding!

Beth, I'm with you on functional vs. racing technology. Thank you for pursuing your dream. I' amazed at what you can accomplish - your gifts are someone else's transportation. As for Portland's shops refusing to work on old bikes - ouch - that seems very un-Potlandish, sorry to hear that. Here in Burlington, VT I'm happy to report that "retro" bikes are "in" and Old Spokes Home fixes and sells and supports the very ideas that you hold dear. They never look down their noses when I bring in my older bikes for repair. Keep up the good work!

Beth, I'm with you on functional vs. racing technology. Thank you for pursuing your dream. I' amazed at what you can accomplish - your gifts are someone else's transportation. As for Portland's shops refusing to work on old bikes - ouch - that seems very un-Potlandish, sorry to hear that. Here in Burlington, VT I'm happy to report that "retro" bikes are "in" and Old Spokes Home fixes and sells and supports the very ideas that you hold dear. They never look down their noses when I bring in my older bikes for repair. Keep up the good work!

My first non-discount store bike was an earlyish 80s Raleigh Olympian - a just slightly above entry level “sport-touring” bike with six glorious cogs in the back and those Suntour ratchet-friction stem shifters. If I still had it, I’d happily ride it set up that way - i.e. I wouldn’t castrate it into a d*** fixie, its likely (and sad, IMO) fate.