i still love the machinery

Effective 9-24-12, I am no longer employed at Citybikes Workers' Cooperative.

Due to my teaching schedule I am not currently available to do at-home repairs for friends, though I am always happy to answer technical and commuting questions.

I just want to go on record with something that feels incredibly important to me tonight:

I still love the machinery.

I still love passing a gorgeous bike parked on the street and staring at it the way some men stare after a beautiful, high-priced escort on the Las Vegas strip.

I still love the flow and the beautiful lines of a lugged steel frame, the stunning clarity of newly-built wheels, the touch of fresh handlebar tape, the promise of a brand-new leather saddle.

I love the viscosity of chain oil between my fingertips and the heft of an expensive wrench in my hand.
I love knowing by feel just how much torque is "enough" when tightening a cottered crank nut, and that a loose headset cup on a cheap bike can be affixed with epoxy and patience and it will work as good as new.
Some knowledge is strictly empirical, hard-won through years of practice and repetition. I love having such knowledge in my hands.

I still think that bicycles are among the most perfect technological wonders of human innovation, and I still believe that they can help us to save the world if we let them. I am honored to have been a part of this technological history for as long as I have been. In an age where information is transmitted electronically, remotely, often without human touch, my knowledge base is in danger of becoming archaic.

I don't care. I love knowing these things.

I still love the machinery, and I always will.
Posted by bikelovejones at 7:30 PM No comments:

Today being a holiday, I made plans to go out and ride all day. I didn't have a solid plan as to where I'd go, I just knew I wanted to spend the day on my bike. It took me awhile to leave the house but I did get out the door by around 11, and decided on a leisurely ride along N. marine Drive, perhaps all the way to Gresham. It was a beautiful morning, just 60F when I left the house but the sun was bright and I knew it would warm up later.

Getting down to marine Drive took no time at all. 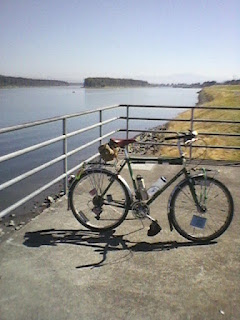 The paved path mostly avoids the automobiles though it does leapfrong back and forth to the main road in spots, finally hooking up with the main road around 153rd Avenue. I turned south at 185th, planning to weave my way into Gresham for a snack; it was only quarter to twelve when I turned off.

But things got a little wierd, and disroenting, as soon as I made my way into the suburbs a bit. Suddenly, there were all these streets and roads I didn't remember (I hadn't been out there in awhile and there had been more construction and development in my absence).

Fairview is an actual city now. I forget this until I ride out there again. When I was a kid, Fairview consisted of a mini-mart, and a single-wide trailer which housed the post office on one side and the police department on the other.

I managed to find my way to 223rd Ave. and slogged up the hill all the way to Stark Street. When I was a kid, this corner had been home to a ca dealership, a donut shop and a small bar. Now, the entire intersetion was dominated by three different car lots. Everything looked different because the streets had been widened and repaved. The light was glaringly bright and I felt like I could have been just as easily riding in Beaverton or Tigard.

I continued on, into downtown Gresham. The K-Mart on Burnside used to have a giant dirt hill next t it where we'd ride our BMX bikes. Today the hill is gone, flattened out, and an office building of some sort stands in its place. I smiled sadly and rode on into old downtown Gresham, stopping at the high school. 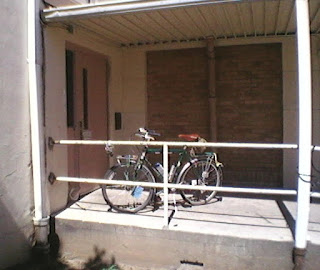 I used to ride to school and lock my bike to this railing every morning. Years ago, my choir director told me he ket a spare key to this door in the rain gutter up above, in one of those little magnetic cases. If for some reason he'd misplaced his keys, he could still get into the building after hours for rehearsals or plays or whatever. (This was over thirty years ago, and obviously it was -- sigh -- another time.)

I could hear old choral music in my head, stuff I'd sung in school, as I pedaled down a very quiet Main Street.

At the old library building, I turned down the side street that took me to the very first house I'd lived in when my family and I moved to Oregon. I was pretty miserable when we first moved here. I had a tough time making friends and hated my school, hated my dumpy neighborhood. 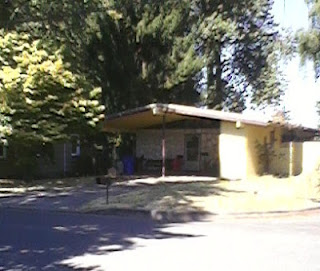 Our house was an absolute turd of a structure, a nasty little rental with a fake-stone front and a carport, and some stupid thing called Ceiling heat. On cold mornings Mom would turn on the heat and we would never get any warmer. It turned out to be an expensive joke and in the end we were glad to move to another house about eight months later. When I visited it again today it didn't look any better; in fact, with the tree seedlings growing up out of the gutters it looked worse, if that was possible. But I was surprised to find myself smiling a little at seeing it again.


Across the street from the house stood a lovely thing, a treasure: a small pocket of trees, like someone's miniature private woods.
Amazingly enough, they are still there today. The entire lot has never been developed. 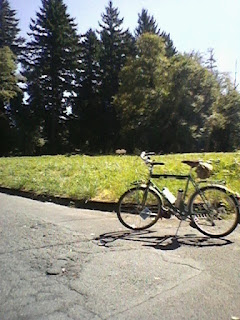 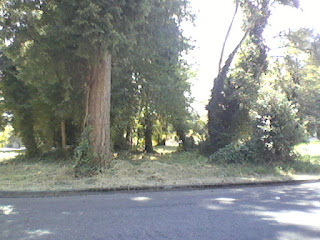 Most days I was alone, lonely, with no one to play with. By sixth grade I was probably the only kid I knew who still wanted to "play" at things, as most of my classmates were transitioing to things like "crushes" and "dating" -- my mother insisted they were lying about their exploits, no reasonable parent would let their daighter cruise 82nd Avenue and neck with a boy in a back seat at age twelve -- but it didn't matter. I couldn't relate to my classmates and wasn't friends with any of them. So on the days when it wasn't pouring -- the rainy seasons in Oregon took some adjustment on my part -- I would leave the house and walk into my own private woods across the street. No one else ever seemed to hang out there, and no one ever seemed to notice me hanging out there. So I was free to play in the woods, spinning out all sorts of heroic fantasies of derring-do. It wasn't ideal and maybe it wasn't "healthy", but those woods were a godsend during my first year in Oregon.
I think it's miraculous that the trees are still standing, and the floor of the miniature wood is still thick with grass and moss. 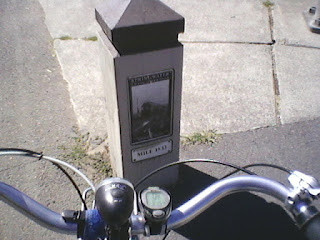 After lunch at the M & M Cafe, I decided to ride all the way back into town along the Spring Water Corridor. This being a national holiday, the pathway had its share of other folks riding bikes and walking, but almost never felt crowded. By now it was going on 2:30 and so I raced back into town, at times reaching speeds of 15 to 17 mph on the flat pathway.

Approaching the Johnson Creek Watershed part of the path after 45th Ave, I enjoyed a beautiful corridor of green en route to the Bybee Street Overpass, a bike-ped bridge that goes over McLoughlin Boulevard and the train tracks. 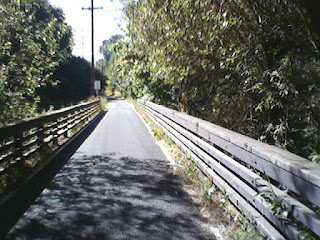 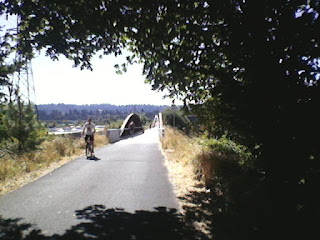 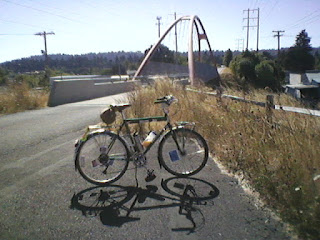 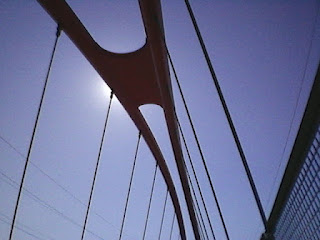 Eventually, slower now and with very tired legs and knees, I made my way back to town. I was supposed to meet a friend at Lucky Lab but he didn't show after half an hour, so I finished my cider and rode into town to catch the MAX to Overlook and ride the rest of the way home. By the time I rolled up the drive way I'd ridden 43.5 miles and was completely ready to stop. A good day on the bike.


Posted by bikelovejones at 8:35 PM No comments: