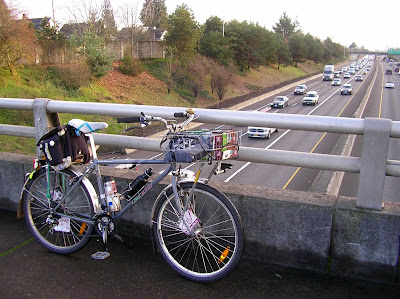 At least when Sweetie and I are ready to sell our crappy little workman's bungalow -- in, oh, thirty years or so -- we're virtually guaranteed a buyer. That's something.
Meanwhile, I'll keep riding, through fatigue, illness, aging and bouts of depression, and through the rain as long as I can.
Today's ride took me up to the cheap bento place on Killingsworth. I had a full punch card so my $4.99 teriyaki bowl was free today (good thing, because money's tight right now). I made a loop past Community Supported Everything and its free closet, and stopped in at the Community Cycling Center to poke through the bins. As I headed home, the sunset was a beautiful parade of blue, purple and pink fading down to red through the clouds. I tried to take pictures, but my camera is basically a goner now. (sigh)
Tomorrow, I'll look for another coffee place to nurse a cup of the good stuff.
See you on the road.
Posted by bikelovejones at 9:04 PM No comments:

back to the bike and dressing for the weather

After two weeks on tour, during which I enjoyed a fair bit of awlking but did not ride a bicycle once, I'm glad to be back home with my Sweetie, the cats and my bikes.
However, I've also com home to a sudden drop in temperatures, and making the adjustment to late fall/early winter is proving a little difficult.
I'm looking forward to a dry day tomorrow during which I'll be commuting to a couple of Hebrew students and running some lovely urban errands by bike. Wool socks and underlayers will be the order of the day.

Speaking of synthetic fibers,  Patagonia finally admits, after years of making outdoor clothing using new and recycled synthetic fibers, that there just might be a little problem with that.
I sort of gave up on most synthetics years ago, after realizing that (a) if I'm not allergic to wool there's no reason to avoid it; and (b) cotton still feels delightful next to the skin in all but the coldest weather. Plus, wool socks are the nicest things I can do to my feet.
But Patagonia, Rapha and a host of other chi-chi clothing companies still push the plastics, I guess because they can. So if you're contemplating buying Yet Another Synthetic Fleece this year, reconsider and maybe look for something made of natural fibers instead. Extra points if you scavenge instead of shop.

Speaking of scavenging -- don't be squeamish! If you spot a wool garment soaking in the rain because it's been sitting in a "free" box for a week, it can still be taken home, cleaned and used. I carry an extra plastic bag with me for just this purpose and scored a Pendleton wool shirt that way. It was a little big for me and missing most of its buttons. Machine washing in hot water and machine drying, plus replacement buttons, has turned this into a winter shirt I wear a lot when the weather turns cold.
No smell, no stains, no problems.

So tomorrow I'll head out and see what I can find. No pix for awhile, because the camera that my friend scored for free and gave me a decade ago has pretty much died and I don't have another camera yet. Be patient. Nice photos will return.

Happy riding, and bundle up. Winter is coming.
(Below: wool cycling cap by Kucharik of California. Made in USA, fits under most bike helmets; sometimes can be found discounted on eBay from time to time. Merino wool is soft and long-lasting.) 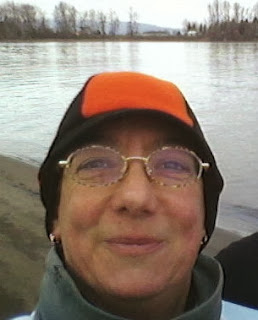 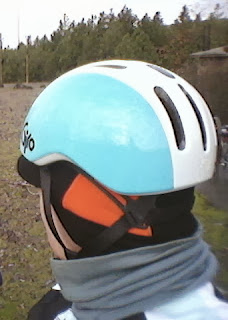 Posted by bikelovejones at 3:11 PM No comments:

This morning I rode up to Alberta Street to meet a dear friend and catch up. She's not a coffee drinker, so she suggested we meet at Townshend's Tea. When I offered a lukewarm response, she suggested I try some sweet chai. I agreed.
The morning was absolutely beautiful, with cool, crisp air and tree-lined streets still clinging to the last of their leaves. Knowing that I wouldn't be riding a bike much, if at all, during my upcoming travels, I relished the morning ride, even with the last of the rush-hour throng. 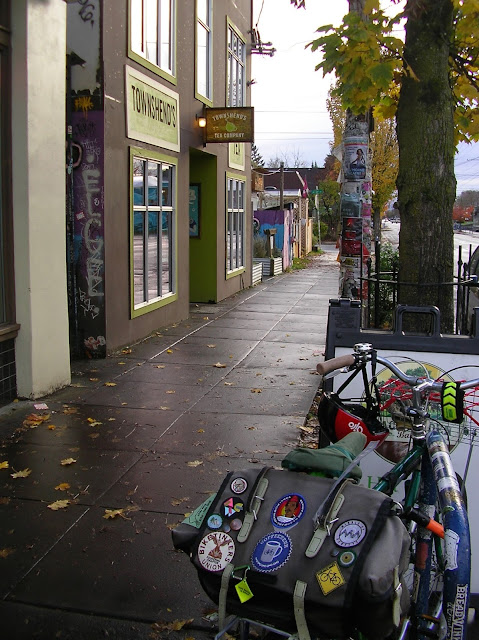 I arrived before she did, parked my bike and waited for the tea shop to open. Next door is a bakery called Back To Eden, which offers only vegan and gluten-free baked goods. I felt sorry for them. I couldn't imagine my life without gluten in it. Still, its good for folks to have options, and the goodies in here look mighty tasty in spite of lacking butter. Could be worth a trip next time. 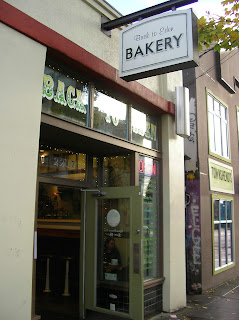 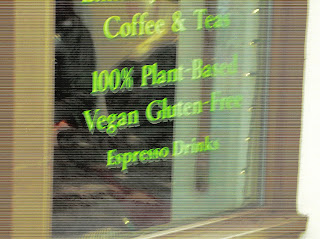 When my friend arrived, we went inside and ordered two cups of sweet chai. It was surprisingly tasty, and contained enough caffeine to make it worth my while.

There's a local cat who thinks that the tea shop is a second home, and she wandered in and out while we enjoyed our drinks. She seemed friendly enough, but we were both of the mind that animals don't beling in restaurants unless they're bona fide service dogs.
Still, she was cute and friendly; before I left I managed to snap a couple of photos of her. 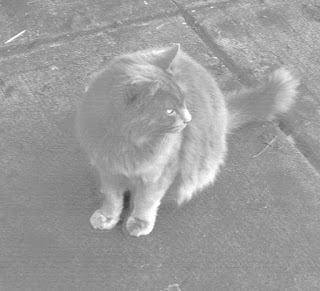 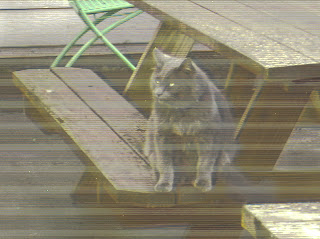 So I think that wraps it up for my Coffeeneuring Challenge this fall. I leave tomorrow for a two-week mini-tour in the Midwest and will probably not have time to go for a bicycle ride.
Plus, as you may be able to tell from these photos, my ancient digital camera is running on fumes and will probably die very soon.

Meanwhile, special thanks to Mary Gersemalina (aka Chasing Mailboxes) for creating the Challenge and happily encouraging all of our rides, long or short.

Posted by bikelovejones at 4:29 PM No comments: