In anticipation of NOT being able to catch the Elite finals of the Cyclocross World Championships live this weekend -- they'll show at something like 2am PST and I have to work Sunday -- I found this clip from the womens' and mens' final race of the UCI World Cup series, held last week in Hoogerhide, The Netherlands. Katie Compton and Niels Albert simply shine as the toughest riders on the course, picking better lines through the tacky corners and staying upright more easily than their opponents, who occasionally went caroming into the tape.
Yes, the Euro courses look deadly dull when compared to, say, the typically muddy Cross Crusade courses -- where are the barriers, people? -- but these racers are faster than you or I will ever be and that is the indisputable truth. Watch, and be schooled.
Posted by bikelovejones at 10:08 AM No comments:

You read that right. I DO plan to race in 2012. I just won't be racing as much as I did in 2011.
I took Stompy over to the shop which sponsors Team Slow. They allow team members to come in with advance notice to do simple upkeep on their bikes. It's true that I can do many things at home, but in the winter it is downright uninspiring, not to mention uncomfortable, to replace one's headset in an uninsulated shed with poor lighting. So off I went to Crank.
Typically, if a shop sponsors a racing club, the shop's mechanics will perform major work on the team's bikes. (Major work covers anything that requires large, specialty tools not found in most home workshops -- like a headset press and crown race remover, for example.) However, the fellas at Crank extended to me what I thought was a lovely and very respectful courtesy, by allowing me, someone who is not only a team member but also a shop mechanic, to come behind the counter and use their tools to perform the job myself. I needed help finding a few things but otherwise was left to my own devices. I dutifully wiped down any tools I'd used, put them all back where I'd fund them, and left the shop after a short time pleasantly socializing (Crank is a small shop with limited wrench space and although it was slow today I did not want to overextend my stay).
I brought with me one of the last new-old stock parts from the box I'd inherited from Quinn, the fellow I'd apprenticed with back in 1994. When he died several years ago I inherited a large box of new-old bike parts, some from the 1980's and 90's which had never been opened. Nothing super-fancy but perfectly useable, like the headset I swapped in this afternoon. The stock headset that had come with my MonoCog was two and half seasons old and had been in the frame for about a year and a half too long; the top bearing cup was dented from all the front-end impacts of two seasons of short-track and cyclocross racing on a fully-rigid frameset.
The new headset isn't tons better -- it's lighter, wth more aluminum, and it's ugly and tanklike the way many headsets from the mid-90's were -- but it should easily get me through this year and that is really all I care about for now. I ejoyed puttering in someone else's shop, getting the feel of the vibe and feeling my way around the different tool layout. One thing that was harder for me is that all of Crank's repair stands are set up for guys who are at least 5' 11" or taller. At 5' 7" my neck was craning upwards a lot. But it was not a huge deal for so short a time and I managed just fine. 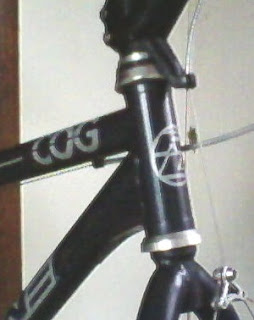 It was such a nice thing, to feel the respect of fellow mechanics. It is a courtesy that I do not take for granted, and something that I am glad to feel that I've earned after all my years working in the bike industry.
I will be racing this summer in the orange-and-black of Team Slow, on Stompy. I had planned on upgrading to a 700c-wheeled singlespeed frame for at least cyclocross season; but the cost of setting it up was going to render the project financially silly as soon as it became clear that my hours at work were going to change. I am selling the framset and various assembled parts to another racer and some more love and a few new parts into Stompy, which continues to behave like a perfectly fine bike.
My knees have been bothering me this winter, giving out the highly noticeable and occasionally annoying creaks and groans of middle age. These hint at the strong possibility that 2012 may be my final season racing on a singlespeed bike. There is a Bridgestone mountain bike in the pipeline if I decide that I need to switch to a multi-geared bike, but I would like to race singlespeed for the entire summer so that I haveeven a small chance of qualifying for the womens' singlespeed podium at series end. (A gal can dream, right? and besides, I got fourth overall last year.)
Racing at all during cyclocross season appears somewhat doubtful at this point. The aforementioned job schedule changes looming on the horizon may make it impossible for me to free up enough Sundays next fall to make the expense and effort of 'cross worthwhile; and while there is now an established Saturday 'cross series I am not especially fond of racing on Shabbat (the only exception I plan to make this year will be for short-track championships, being held up on Mt. Hood on June 30; and then only if I can work out transportation). For cyclocross season, I may just go out and cheer my teammates on an occasional Saturday afternoon next fall and call it good.
So it looks like my racing season will focus almost solely on the PIR short-track series, which begins on June 4 this year. Once again, I will race in the womens' Singlespeed category. Stompy will be ready. And once again, I will have fun no matter where I finish.
Posted by bikelovejones at 5:50 PM No comments:

yet another lovely bike: 1970's Raleigh

This came into the shop last week for some love. Not sure of anything else about it. What caught my eye was the sweet chainguard and that delicious royal blue color. Yum!

Posted by bikelovejones at 12:02 AM No comments:

This beauty, from my favorite era of vintage bicycles, came into the shop a couple of days ago and we've all wasted a few minutes each standing around fairly drooling over it. Before my co-worker could snatch it up to photograph for our web site -- yes, it's for sale! -- I took a few photos for myself.

Sadly, it's just a little too big for me. (believe me it this had been a 54cm I'd be sorely tempted...)
Posted by bikelovejones at 7:19 AM No comments:

Circa 1999. Custom color combo, lefty, made-to-order in USA. I am selling it because I can no longer use a single-strap bag on my bike. (I've since switched to a backpack.)
UPDATE: This bag has been sold to a happy camper, presumably one without shoulder or back issues.

Posted by bikelovejones at 8:41 AM No comments:

who owns your brain?

Specialized is suing two former employees who left the company in 2010 to start their own bike company.

The company, Volagi, is producing a carbon bike design that is unlike anything Specialized currently offers -- see the clip for a brief explanation -- and it works well. So naturally, Specialized wants in on the potential profits.

Because the two men signed confidentiatlity agreements while working at Specialized, they are being sued for breach of contract. Specialized is saying, in short, that all ideas the two men thought of -- whether at work or in their free time -- are the property of the company and that the men should not have been able to start their own company.

This is capitalism at work. Small company succeeds, big company gets jealous and sues for loss of profits. So it goes after the very thoughts of the former employees as intellectual property. Seriously, this is the way things work now. And as long as corporations are allowed a measure of personhood (thank you, Supreme Court -- wankers) things will continue to be this way.

So watch your thoughts, people; and for heaven's sake don't sign anything that could give ownership of those thoughts to someone else.

It's a good thing I'm not an individual contractor being paid to compose music.

Frankly, I'm no huge fan of carbon fiber -- you'll never see a carbon bike under me -- but I support the little guy and hope this upstart prevails. If Volagi loses its lawsuit, I predict -- and even hope for -- a Specialized boycott.
Posted by bikelovejones at 9:13 AM No comments: