I am home after nearly a month away for work.

For the first three weeks, I rode my blue Kansas bike and towed a trailer on loan from a family at my annual summer gig at B'nai Jehudah. I rode fewer miles this time around -- camp kept me busy during the day and dates with friends kept me out many evenings -- but I rode more regularly each day.
I also did something else this time around. Or rather, it's what I stopped doing that made a difference.

I stopped tracking my mileage.

My last entry in the composition notebook that is my latest bike log dates from the day before I left Portland in late May. I didn't bother to track miles during my Kansas stay, at first because I saw no point in tracking such short rides; my homestay was less than a mile from the temple. In the end, it became less about the distance and more about a lack of necessity. I simply lost the need to track my mileage anymore. So I stopped.

I haven't ridden a bike since I went to Austin for the Women Cantors' Network conference, about a week. I plan to ride tomorrow, in spite of temps in the high 90s (I'll go early in the day). Tonight I swapped out the All-Rounder for the newly rebuilt Bridgestone. I'll ride the latter while I spend some qulity time tearing down the former and overhauling it, including rebuilding the hubs onto new rims. I got this frame almost eight years ago and I haven't done a full overhaul on it in at least five. I figure it's time.

The Bridgestone rides nicely. I've got  slightly smaller set of chainrings on it than I would like, but I may swap in a larger set later -- or a smaller set of cogs in the rear. I added front and rear racks that I'd been sitting on awhile, and NOS fenders from my former shop. I think I'll enjoy riding it this summer.


Before: B'Stone MB-4, circa 1989, retro-fitted with racy bits as a short-track mountain bike 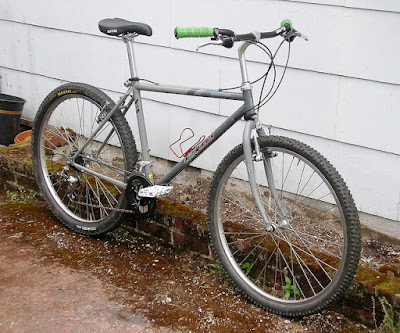 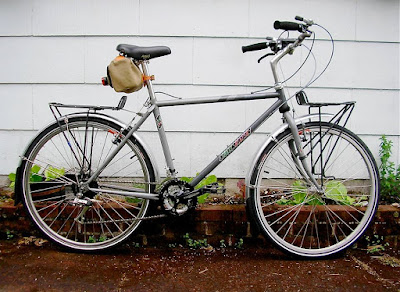 Posted by bikelovejones at 10:01 PM No comments: