An update on the little project that has become near and dear to my heart.

With the help of many at my home synagogue and friends in the local bicycle scene, the bicycle below represents almost three dozen bicycles handed off to our newest Portlanders in the past year. This sustainable, affordable transportation will extend their limited government stipend and will go a long way in helping them get to English classes, doctor appointments and work.

Many thanks to everyone who has contributed, with special shout-outs to Havurah Shalom, Seven Corners Cycles and Bike Farm for helping me to source bicycles, accessories and spare parts for free or cheap.

Here's the latest little beauty that will soon be handed off to folks in need of affordable transportation: 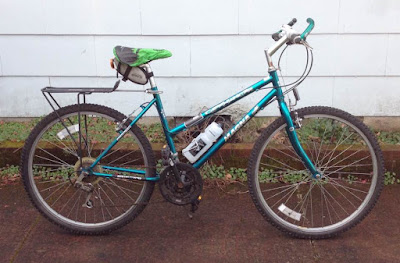 It's nothing fancy; in fact, ten or twelve years ago this bike started life at a department store somewhere. But tuned up and outfitted with a lock, lights and a rear rack, it will now give someone an affordable, healthy and fun way to get around.

And that's the point. Bicycles are a GREAT way to get around town for so many reasons. I am proud that Portland remains a good place to ride a bike.


I am still accepting donations of adult-sized bicycles, locks, lights and mini-tools, and rear baggage racks or baskets. Now that I'm home for awhile from touring, I want to bang out some tuneups and get these bikes into the hands of people who will really use them! If you're in Portland and have something to offer, email me here: periwinklekog-at-yahoo-dot-com.

Thanks again for helping out!

And happy riding!
Posted by bikelovejones at 9:49 AM No comments:

no one is being fooled: portland sunday parkways will skip outer SE in 2017

The new Sunday Parkways routes have been announced for 2017.

The one big change is that there will be NO route in outer SE Portland (where the Lents neighborhood intersects with the Springwater Corridor, a MUP that has been filled with homeless encampments and which was the scene of some friction between Parkways participants and homeless people last summer).
Instead, PBOT has decided to create an outer NE route through Parkrose and the Gateway District, thanks in part to a grant from People for Bikes. PfB will give development funding to Portland to build new bike/ped infrastructure through the Gateway District.

We all know what happens shortly before or after such improvements come to a previously down-at-heel part of Portland: Rents go up; some rental properties are converted into condos or single-family houses for sale; and new businesses that cater to the new, leaner middle/creative class open. Soon, people of color move out and white people move in.  Gentrification happens. And it will happen in outer NE.

People who are paying attention to this change in Parkways are crying foul. We are not being fooled.
We are not being distracted from the fact that the city could do NOTHING about the homeless encampments along the Springwater -- once a shining jewel of a Multi-Use Path but today a place so scary I won't ride there anymore, even in broad daylight. Because the city has no plan and no place to house all these people -- nearly four thousand, by some estimates. And the longer those who want to come inside cannot, the more volatile the situation will become. What was merely tension last year would become real conflict if Parkways returned to the Springwater, and that is part of why they're not including it this year.

You can read the rest of the story here:

No one who is paying attention is being fooled here.
Just sayin'.

Posted by bikelovejones at 7:06 PM No comments:

The soul of the country


This is a tough one for me.


Some of you know that, after my nearly two decades in the bicycle business, I've developed what can be called a troubled relationship with retail.

Disclaimer: my politics around capitalism are not pure, and cannot be, because as a human being I take up space in the world and therefore must consume certain things in order to live -- like food, clothing, shelter and medication.
Secondary needs these days include air travel, too much time staring at computer screens, and upgrading to a slightly more "professional" look --  all of which ties my stomach in knots as I veer between joy in my work and horror at the mushrooming size of my carbon footprint.

That said, I could not help but observe the ongoing discussions about the recent crop of Super Bowl commercials -- many, it seemed touched upon themes of gender equality, immigration and other progressive ideals.
And I guess that's noteworthy in a world where so much is communicated through mass media and values are actually molded and shaped through the power of effective advertising.

But I continue to see beyond the world that is to the world that might yet be -- a world in which people reclaim the knowledge and power to repair and repurpose things, to grow their own food (even a little bit), and carve out lives (rather than lifestyles) that do not require half of one's paycheck to pay for a work wardrobe and the other half for rent,  a false dichotomy if ever there was one.
I imagine a world in which people may not live quite as long as the national average today, where medicine is used to find cures for disease rather than to prop up a life lived too long and in too much fruitless pain and suffering, a world where we stop being so afraid of death and begin embracing it as part of the natural arc of life.

I imagine a world where the cost of living does not outpace a living wage, and where people doing entry-level jobs are respected, encouraged and supported in their efforts to work for something better, rather than treated like throwaway components in a mercilessly impersonal machine designed to serve only those whose excessive wealth comes on the backs of the working poor.

Finally, I imagine a world where strong, connected communities are only one small step outwards from strong, supported families, a world where no one has more than they truly need so that everyone can have their needs met reliably, so that no one need fall through the cracks anymore.

So, while these advertisers may be applauded for taking on such powerful topics, the fact remains that each of them spent a fortune in production costs -- sometimes in the millions of dollars -- to create a one- to-three-minute spot whose ultimate objective remains

Getting People To Buy More Stuff.

Much was made of the heartwarming Hyundai ad, which selected a few American soldiers serving in the Middle East to sit in a room and, through amazing technology, "attend" the Super Bowl game remotely, in real time, as their families sat in seats in a stadium halfway around the globe and video-chatted with them on electronic tablets.
Except that the advertiser was an automobile manufacturer whose product depends upon the petroleum deposits lying beneath the ground in the very countries we've sent our troops to, or with whom our government cuts strategically questionable deals.

Sorry to be such a Debby Downer about all this. But for me, the Super Bowl's excesses -- its theatrical bloodlust, its simplified, steroidal brand of patriotism, and its objectification of women (sorry, I did NOT get a strong feminist vibe from Lady Gaga's um, performance) are compelling me to reconsider my ongoing difficulty with capitalism as it plays out in this country.
Because I cannot help but think that the whole messy affair -- the Bowl game, the marketing, the glorified violence and worst of all, the simplistic groupthink being pushed on all of us -- amounts to modern day bread and circuses.

That makes me really nervous,  for the soul of my country and for my own soul.

Like I said, my relationship with capitalism, including my struggle with it, is far from pure. It is deeply messy, complicated and difficult and the are times when I have to cross back and forth over my own lines, every day, just to survive.
And yet, part of that struggle means owning the things which I depend on for my life and livelihood, alongside the things that give me grave pause about the world we live in today.
I do not expect to come up with a satisfactory answer, for myself or anyone else. Coming up with that answer will require me to look hard at my own tastes and habits, my own choices about where I choose to wear the blinders and how willing I am to remove them.

(Even something as simple as my love for professional baseball -- a far more civilized game but with just as much historic scandal and corruption -- must come into question if I am going to be real about this internal struggle. How much of my willful innocence am I willing to let go of?)

So I guess I am still on the hook with the struggle, for my own soul and for the soul of my country.

Posted by bikelovejones at 7:25 PM 2 comments: