As my readers know, I dabbled in racing for several years and enjoyed it. However, the rising costs and time demands involved with the sport -- not to mention my decided lack of meaningful improvement -- made it inevitable that it would come to an end at some point.
That point came for me, after several fits and starts, this [ast winter, when it was clear that there simply was no room in my life for racing anymore -- and that I found I was really okay with that.
I'd had a good run. And I still have friends who race and I enjoy watching them and cheering them on. But I don't really miss the effort myself.

So I've been sitting on this Bridgestone mountain bike that had been retro-fitted with racing parts, and I decided this spring it was finally time to sell it, or turn it into something else.

I stripped off the racy bits and sold them off to help finance a rebuild as a more sensible commuting bike. It's a work in progress, and I probably won't get it all done before I leave for my teaching residency; but if I get it most of the way there before I go then it will be a simple matter to finish it off when I return. My goal is to have, essentially, a "replacement" bike to ride while I do a full teardown and overhaul on the All-Rounder. The All-Rounder needs its wheels rebuilt and all the bearings overhauled and/or replaced, which will have to be done in pieces with my work schedule. So I've got a plan, and got this far on the BStone conversion today: 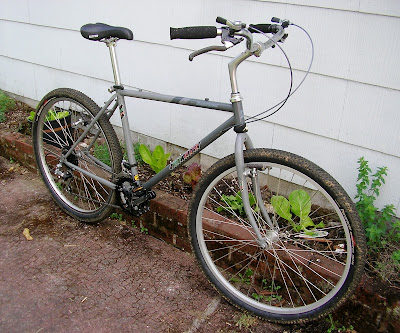 I've swapped in a Wald #8095 Touring bar (that was salvaged from my niece's bike -- I had to buff the rust off it but it works fine and will be comfortably upright). Kept the stem, seatpost and headset. Everything else got stripped off and sold.


I got some very affordable Vuelta cranks with steel chainrings -- they should keep me awhile while I rebuild the All-Rounder -- and UpCycles sells a good, basic Tange bottom bracket for $20 that should definitely last a couple thousand miles at least.
The WTB saddle will go, to be replaced by either my Brooks saddle (from the A-R) or an old Avocet Touring WII that I recently found.  I also plan to install some old Blackburn front and rear racks on it, which are aged beautifully but still have plenty of life left in them. 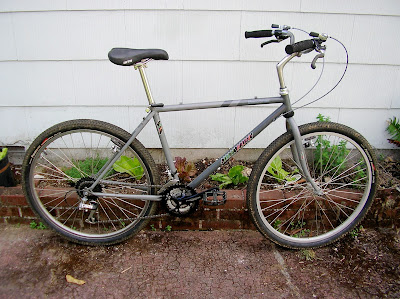 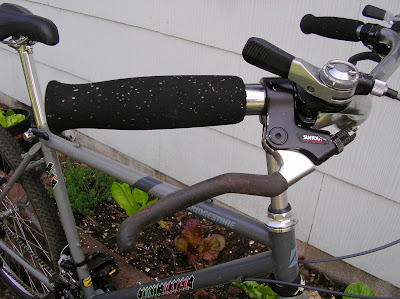 The cool part: I am using Shimano Altus derailleurs and cantilevers, and Suntour brake levers and thumb shifters set on friction mode. It's what I had on hand, and the shifting works fine.
Though to work with the frame I have, I will need to install a narrower tire so the front derailleur can have its full range of motion unimpeded. (Right now it still has the small block tires I used at short-track; I'll be swapping in some Rubena 1.5 Flash tires tomorrow, which should do the trick.) 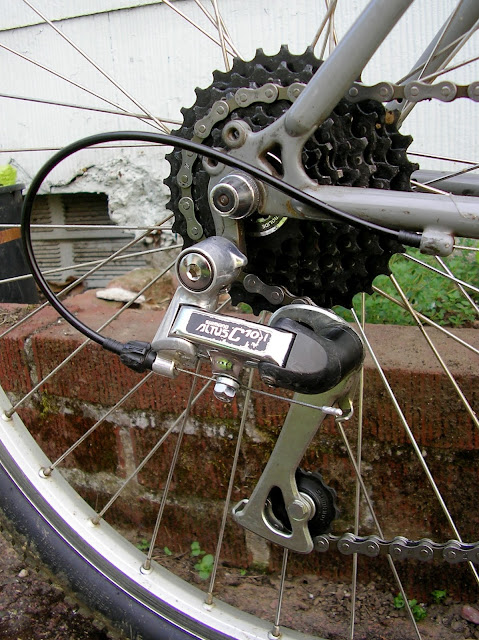 The bike is grey and will be sort of sombered out with grey and black components and accessories -- I plan to install some grey fenders I have sitting around -- but I'm okay with the blse, quasi-stealth look. If it means my bike won't get noticed right away that's fine by me. I get lots of stares at my All-Rounder, even with all the paint nicks and dents. It will be nice not to attract so much attention.

I'll try and get enough done tomorrow morning to make it rideable, and if possible do a shakedown cruise to watch my friends race at PIR tomorrow evening.
Posted by bikelovejones at 9:28 PM