This morning, I woke up feeling groggy. I sat up and immediately felt dizzy.
Which was annoying, because I had signed up to work a volunteer shift as a roving mechanic for Sunday Parkways. I did not want or need to be dizzy.
So I took a shower, dressed, ate some breakfast and felt the waves of dizziness come and go. I convinced myself that, once I started riding, being outside in the cool morning air would help clear the dizziness away. I would ride anyway and things would get better.
And, by and large, they mostly did. I enjoyed a slow loop around the Parkways NE route, and was surprised to be asked for help only once my entire shift. Still, it was cool and cloudy and very pleasant to ride around, and occasionally bump into friends along the route. I brought a camera but in the end opted not to take photos. It felt better when I was on the bike and moving, so I did that for a couple of hours, enjoying riding down narrow, tree-lined residential streets I might not otherwise explore but for the route.And mostly the dizziness was kept at bay and I had a lovely ride.
But the dizziness has a connection to my cycles of peri-menopause and to my depression. So it was no surprise that, along with the dizziness, I also felt emotionally a little out of sorts all day. And physically, quite tired -- even though I'd gotten a decent night's sleep last night.
So I bailed about half an hour early from my shift, ate some lunch and went home, where I went straight to bed and slept hard for a couple of hours.
When I awoke, I felt groggy and out of sorts physically and emotionally. I knew that it would be useless for me to try and get any musical work done, so I just sort of sat around and did very little. I was not feeling panicky -- that's been a good outcome of the treatment I've been seeking for depression -- but I was highly aware that my emotions were not in a great place. I could feel the downward slope of my mood as it happened. By dinner time, I was ready for another nap. But I styaed up, ate a little something, and chatted with a friend electronically for awhile.
Now, at the end of my day, I can feel the dizziness returning, and I know that if I go to bed now I will probably sleep through the night.

This isn't something where I feel like I need to call the doctor and ask for treatment to block or bury these symptoms. I've come to understand that it's all of a piece, peri-menopause and depression and all the related chemical changes that I experience with hormonal shifts. It's not something to try and avoid. It's something that just happens. And really, there isn't a whole lot else to do but be aware of it when it does, and hope that I'm in a good place to allow myself to sit with it until it passes. Today, I was in a good place. I was able to ride my bicycle for a few hours, and then I was able to come home and rest. So although it was not my most productive day, it wasn't a total loss, either.
I got to ride my bicycle.
And I got to come home to my Sweetie.
And now I'm ready for bed.
Hopefully things will be a little easier tomorrow.
That I am able to entertain hope is a good thing.
Plus, I get to ride my bicycle again. 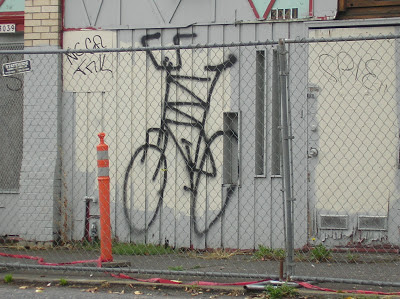 Posted by bikelovejones at 9:13 PM