From the local racing listserv, posted this morning:

"...it is with a heavy heart that I announce the death of my rear wheel. It gave up the ghost about 25 minutes into the first Trophy Cup last week. Then, while I was landing a sweet remount after some fancy barrier footwork, the wheel said, "That's enough. I've given you all I can. Goodbye."
Cracked carbon is a sad thing. I will bury it somewhere on the slopes of Alpenrose [race course].

If you have a tubular rear wheel, rim brake, 11-speed compatible, I'd love to buy it from you for a reasonable price. I can go carbon or alloy. I don't care if it matches my front wheel. Everyone loves a frankenbike."

So, what have we learned from this?
Based on the racer's apparent willingness to replace it with yet another carbon wheel, nothing.

(Below: just a few of many photos I found online of destroyed carbon wheels..) 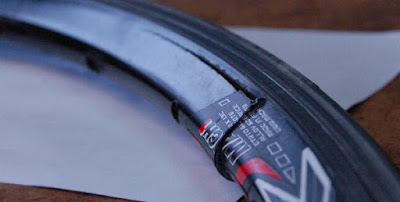 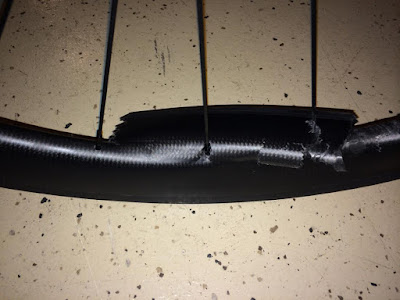 When I raced 'cross and short track, I did so on a steel singlespeed mountain bike, with alloy (you know, METAL) wheels. I bent a rim a few times (technically I could've qualified for the Athena class if one had existed at the time). In all cases, I was able to true the rim up enough to ride again. I made those wheels last three seasons before I had to find a replacement set.

At this point, if I were feeling peckish, I stick out my tongue and wiggle my fingers and go "nyah-nyah" or blow raspberries or something like that. But these pictures speak for themselves.
And while the demands of off-road racing are pretty intense on both man and machine,  the fact is that much of this damage is being cause by riders who weigh less than I do/did. So either they're really, inappropriately aggressive in their riding style, or racing off-road on carbon is simply not the best idea.

And yet -- warning! anti-industry rant ahead! -- this is the sort of stuff the industry tries to sell a million racer wannabes in the interests of "research and development".  Please. The only thing the industry is really interested in is R & D for the elite racers who give their products the greatest exposure. They care nothing for the results of real-world "testing" that a 200-pound recreational rider would put a carbon bike through. All they want to do is sell him more stuff that will break so he'll have to buy more stuff.

My steel bike was heavier, true. And I was heavier, and slower, than most of my competition. But my bike lasted five seasons of off-road racing every summer and fall, and I had a great time even as I finished last most of the time. The bike industry does not care to hear about the last place finishers who had fun. They only want to persuade me that in order to get better, place higher, I need to -- yup -- buy more stuff. Ergo, carbon.

Is it a conspiracy? I'll let the more paranoid among me decide.
To me, it's just silly. And wasteful as hell.
We now return you to steel bikes.
Weekend forecast in PDX: RAIN. Which should make for some really fun afternoons in the mud.
Happy riding!
Posted by bikelovejones at 8:28 AM