Several years ago, when I as still working at the large Reform synagogue here in Portland, a bicycle was abandoned there. My boss took the bike inside and stoed it in the religious school,. hoping that whomever had left it there would come back to reclaim it before too long.

They never came back, so my boss asked me to "make it go away".
This is what it looked like before I did anything. Straight handlebars with bar ends, grip-shift thhat no longer worked,  and a very uncomfortable saddle. 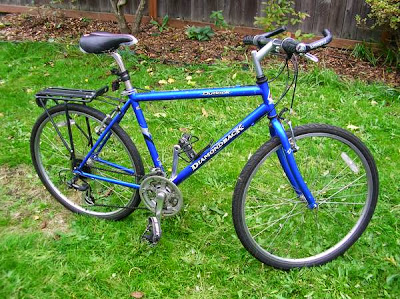 I took the bike home, put it up in the stand and fixed it up. I straightened the bent derailleur hanger (which was probably why the bike was abandoned to begin with -- the rear derailleur had gone into the spokes), trued the wheels, adjusted bearings and swapped out the straight handlebars and grip shift for some swept-back bars and thumb shifters.

When it was all done, I had a perfectly rideable cheap city bike. 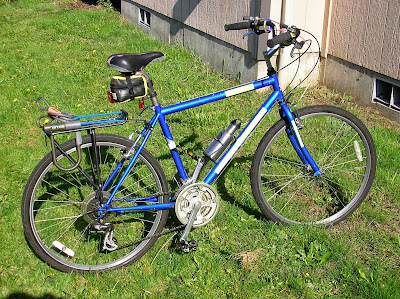 I sat on the bike for a few months, until I got hired to return to my Kansas shul as High Holidays Soloist. Knowing that my loaner bikes there had never fit me well, I proposed shipping this bike there and leaving it there for my annual summer visits. When the visits stopped someday -- no gig lasts forever -- I would either box it up and bring it home with me, or I'd donate it to the bike non-profit in Kansas City.

Since fall 2014, the bike has lived in a garage in Overland Park, Kansas, used only when I show up each summer for camp and occasionally as a bike for the senior rabbi's house guests.
This summer I will need to either overhaul or replace the bottom bracket and slap on a new chain. Otherwise, I'm sure it will see me through another June.
I am also aware that changes are coming to the synagogue -- the senior rabbi will retire in three years and the future of the summer program is unclear -- which will require me to think about how I spend my June not too long from now. I certainly won't be doing this gig forever.

But for now, my blue bike is a signal to the children of the synagogue that Beth is back. I can't wait to toss my guitar in the loaner trailer and haul it to staff week in less than a month. 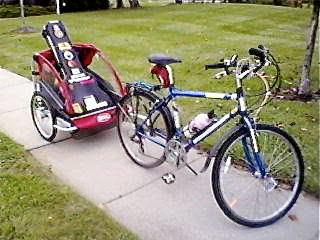 Posted by bikelovejones at 10:03 AM