E-scooters: is Portland ready for these? I'm not.

If I get smacked by one of these at Sunday Parkways tomorrow I swear I'll toss it in the river.

scootersintheriverpdx.com
How many scooters have been thrown into the Willamette River?
A running tally of e-scooters and bikes reported as dumped in the Willamette River in Portland, OR
Seriously. I'm riding what may well be my final volunteer mechanic shift at Sunday Parkways tomorrow (after 11 years I'm ready for a break). E-scooters have taken over the city streets and so far, while most people seem to be handling it well, enough jokers are riding these things too fast, the wrong way down the street and often helmetless (illegal but also unenforceable) that it's a matter of when, not if, someone will die.

I wish the City Council or PBOT had figure out how to enforce the rules before letting these things loose on the streets. I've almost been hit twice in the three weeks they've been out there.

I know I'll see E-scooters tomorrow during my Mobile Mechanic shift. They're allowed to be on the route at Sunday Parkways. Let's hope no one g\does anything stupid, because if they do, the City has clearly proven its inability to deal with it.
(below: on the sidewalk without a helmet. Both illegal. Whatever.) 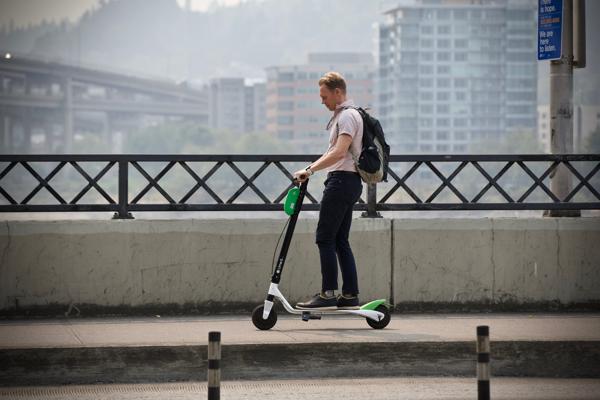 Posted by bikelovejones at 9:54 PM

Hey! That's actually me on that scooter. Found this post doing a reverse image search. A photographer from the Oregonian captured that photo over the summer in 2018 when we were having all those wildfires that year. It was quite funny being a small-time Portland poster child of the year of the scooter. The Oregonian used the photo again and again and again. I got quite a few messages from friends about it. I saw some online angst about it but never responded to anyone. Now that we're home stuck because of COVID-19 I decided, "Why not?"

Nearly two years into the scooters' introduction, do you still feel the same way you did when you wrote this?

I have no problem with the scooters themselves. My issue remains with people who are riding irresponsibly and dangerously. At this point, its moot since scooter use is all but zero.
Hope you're getting through the shutdown okay!