(Below: Aerial view of the center circle in Ladd's Addition, from last year's Ladd's 500 bicycle relay.)

Someone figured out that if you ride the loop around Ladd's Circle in southeast Portland 500 times, it would equal roughly 100 miles. And that's how the Ladd's 500 was born.
Now in its fourth year, The Ladd's 500 is a relay ride.
The goal: The complete a century by riding 500 laps around the Circle.
The conceit: do it as a relay, both to ease the pain and to make room for friends and an excuse for a party.
Solo riders can bring two bikes and do exchanges between them and make it a solo relay.
There are other rules, but since this is an unsanctioned non-race, the rules are made to be broken.
The motto of the event is "Let's do something stupid."
Which is perfect.
Because riding in circles again and again for several hours in a residential neighborhood, and trying to avoid getting smacked by the racer wannabes trying for the Holeshot To Nowhere, Is pretty damned stupid.
And a helluva lot of fun.

So I returned for my second Ladd's 500.
This time, as a solo rider with no reasonable way to get two bikes to the event, I decided to raise awareness for Crohn's disease research and patient support by making my Crohn's the point of the ride. Signing up as Team Poopy Ass, I decided that, in the absence of a second bike, every time I went to the porta-potty it would count as my exchange. My goal was to complete as many laps as I could for as long as I could ride, and leave just a tiny bit left in the tank for the ride home.

Mission accomplished. I had a great time riding and hanging with some of my Portland bikey people, and answered a few questions about my life with Crohn's disease. (Online, I raised a little scratch for the Crohn's and Colitis Foundation, which was cool.)
Tallying up my miles -- strictly out of curiosity, of course -- I rode the actual loop around 13.5 miles (including an entry lap to get to the inside of the circle, and two more laps to get out, plus 69 actual event laps that counted). I didn't count the distance ridden during my multi-modal trip to Ladd's Addition, or my ride home.
And when I got home I had a delicious, two-hour Shabbes nap.

These guys got up at 3am to bike hundreds of scratch biscuits to hand out during the ride.
They required 250 pounds of flour, and were pretty tasty.

The Pit, where teams did rider and bike exchanges. It was also the only safe place to stop and get off the course for teams and solo riders alike. It got nuts out there at times.

The leader board. Teams stapled their names to a wooden board and kept track of their own laps using an honor system. All in good fun.

At the end of 69 laps, including four "exchanges," I was still smiling but ready to go home.

I earned this puppy. 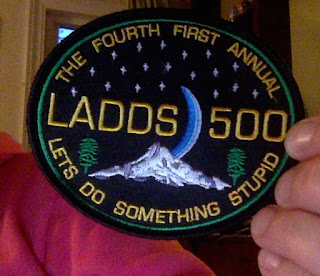 Posted by bikelovejones at 8:15 PM